Updated 11:30 p.m.: The power went out in Old Ballard at 8 p.m., forcing many establishments to close their doors early. One business told us that Seattle City Light said a blown transformer to blame, and it could take as many as four to six hours to restore. But at 11 p.m., the power came back on. 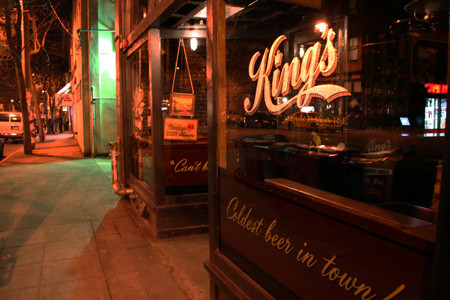 Facing the prospect of an extended outage, many restaurants and bars closed early, from Kings Hardware to the Copper Gate. Sunset Tavern moved its Seattle Improvised Music Festival to The Josephine in Ballard, promising to refund tickets for anyone who couldn’t make it. “Weird to see Ballard Ave. so dark!” said My Ballard reader Susan, who emailed us with the news. 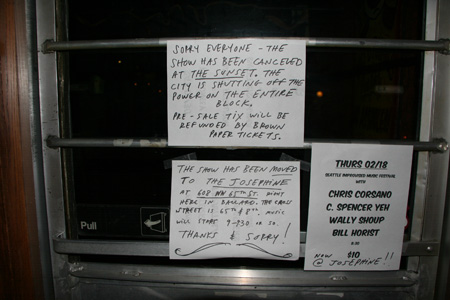 Oddly, a couple businesses were immune to the outage. Both Moshi Moshi and the Tractor Tavern still had power, and they told us they believed they were the only businesses along the stretch of Ballard Ave. with electricity. Balmar and Matador kept power, but they said everyone else to the southeast were dark. “The street is dark from about Thaiku on down,” wrote My Ballard reader Anna in an email.

Earlier in the day, 173 customers lost power along the Ship Canal in Ballard and Fremont, according to an earlier report by Seattle City Light. It’s unclear if it was related to tonight’s outage. We’ll update the story in the morning once we’re able to contact City Light.

Wow! I'll bet those businesses lost a lot of money, having to close on a Thursday night. That sucks!

Is “Copper Gate” a typo? They're way up on 24th and I did not notice any outages in that area last night.

The city told us (the BalMar) that everyone's power would be down at 8pm, and we had to clear a packed bar. But our power ended up staying on, so we sat needlessly empty for a while. It was an expensive “repair” for a lot of the businesses on the block, whose main hours of operation are in the evening.

I was at Vain at 3:15 when there was a loud explosion that shook the windows a bit, and half (only half!) of the circuits went out. Very weird power outage.