“At least seven (maybe more) of these beautiful fishing boats exited the locks together this morning and steamed by my office,” Ron emailed us on Wednesday. 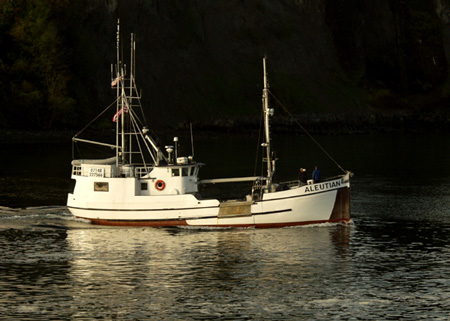 “I only got my camera out in time to catch the last two. They were all painted up and ready for work. Anyone know what they are or where they are going?”

According to our news partners, The Seattle Times, this small fleet is headed to Alaska for halibut season. The halibut fleet, which used to be about 130 schooners is now down to less than a dozen, the Times reports.

Marvin Gjerde, the 61-year-old skipper of the 99-year-old Tordenskjold says in the video below, “It’s probably the oldest working fleet left in the United States.” This nearly century-old fleet “has helped establish Ballard as a hub of the North American fishing industry,” the Times article states.

Video and production by Danny Gawlowski of The Seattle Times.

The parade that Ron saw out his office window was coordinated by the Fishing Vessel Owners Association and a fishermen’s union that is documenting the aging fleet. Seeing seven of these schooners together is an unusual site. Gjerde tells the Times, “We usually head off to Alaska one or two at a time, and once we leave town everyone is on their own.”

Here is a link to the full article by Seattle Times reporter Hal Bernton.

7 thoughts to “Halibut schooner fleet heads out for another season”