Both the Loyal Heights and Ballard community centers hosted their annual egg hunts this morning, drawing a respectable crowd despite the cold, breezy weather. “A lot of families, a lot of kids, a lot of smiles,” said Melissa Valenzuela, the coordinator of the Loyal Heights center.

Like every year in Loyal Heights, it was quite the scene when kids of all ages stormed the field as the countdown hit zero. With a little smaller turnout than last year, many kids made off with a good haul. 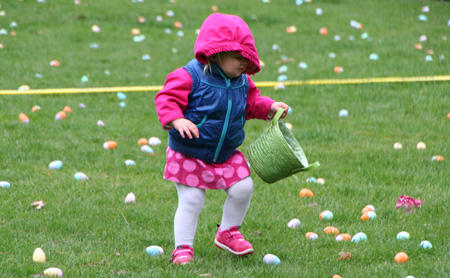 This little girl briefly took to the field early, undoubtedly in search of one of the golden eggs. Kids who found the special eggs won prizes like stuffed animals — all financed by donations from the community. The center also served hot drinks, donuts and fruit.

The egg hunt went off without a hitch despite the discovery this morning of two windows on the back side of the building smashed with rocks.

“The first thought was, I hope they didn’t steal any of the eggs!” said Valenzuela. “We were incredibly disappointed but also grateful because we had set up for the egg hunt and nothing had been damaged or stolen.”

Easter egg “hunt”? Looks more like an Easter egg retrieval to me.
How will these kids ever learn problem solving skills if we continually make life's challenges unchallenging?
Oh wait, I forgot about video games…