The Equal Exchange Espresso at the Ballard Market has a new espresso machine. We’re told that this isn’t just any espresso machine, this is “The Slayer,” one of only two in the Seattle area, although according to the Seattle Times a new coffee shop in the Bravern in Bellevue will be getting two in June. 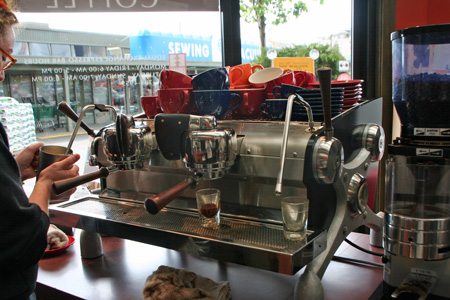 They call it the “The Slayer” because it’s made by Slayer Espresso in Georgetown. “Customers keep on asking us what’s different? What’s new? What’s the big deal? What’s the big fuss?” Equal Exchange Espresso manager Alison Booth tells us. “The big advantage of this machine is that it allows you adjust the pressure while you’re pulling a shot, which gives you a lot more control over the quality and lets you extract as much of possible of the good flavor and as little as possible of the bad flavor,” Booth says.

Last year, when Slayer released its first Seattle-area machine, the Seattle Times wrote, “The Slayer lets the water spend a little more time with the grounds, pulling a shot in 30 to 35 seconds — compared with 18 to 23 seconds for your average espresso machine.” This, Booth says, is what makes the coffee taste creamier, smoother and sweeter, “the water gently bathes the coffee.”

Awesome! They have excellent coffee there…One of my favorites in Ballard.

So you're saying I picked a bad time to switch to tea?

It tastes good, but a lot of marketing B.S. Tastes the same as any other machine to me.

Bah. Instant coffee for me.

Thanks for covering this 'local flavor.' I love learning about regional manufacturing (and about coffee).

Chicone – I'm curious if you tried their espresso before and after this machine? I've never been but now I'll at least drop by to give it a go.

One thing I know about espresso machines is it all depends on the “driver/operator.” For instance if I tried to walk in their and pull a shot on that machine you would probably spit it out. However, if someone trained on that machine pulls a shot it will taste 100% better and that’s true of any manual or semi manual espresso machine out there in my experience. This is why companies like Starbucks took out all of their manual espresso machines and put in automatic ones. They wanted all their shots to taste the same and take the guess work out of their baristas hands. Of course their espresso is burnt and terrible in any machine…

Hmm, isn't it about the coffee profile. More ways to screw it up! Hooray!

Seasons in the Abyss!

You're all missing the key point of this post: This machine is a made in USA (Seattle even) product! About time someone outside of Italy made an espresso machine.

Further, the thing looks cool. I get coffee here at least 2 days a week, but I drink the drip. It serves me just fine.

Of every Slayer I've had a shot pulled from, it's made zero improvement over what a barista can do with, say, a GB/5.

Wouldn't have thought to go to Ballard Market for good coffee.. good to know : )

Slayer vs. Public Enemy mashup! Now that's something I can get behind.

A good espresso shot usually falls between 18 and 23 seconds. I'll give this a go but it's not as if there was a clamoring to improve what's already out there. I'll call BS on this water “gently bathing the coffee” sentiment. The pressure and exposure to the ground coffee is what makes the shot, not some gentle bathing.

Love Aster's Clover machine, one of the few machines sold in the NW before Starbucks took them over…

as a barista working on this sweet machine, i can honestly say that my inital skepticism was challenged upon first shot off of the slayer.

of course, if you have a cold, or just don't care much about coffee, you probably won't notice much of a difference, and that's okay too :)

After having used this machine, i can see how minimal changes in brew times and dosage can dramatically alter the flavor of a shot. @hometownguy, with this machine, you can pull out something interesting (if not tasty) even from an inferior coffee. Just to give an example, i'd be excited to try a straight robusta shot from this machine. :)

If you're a barista, you simply must try using this machine before comparing it to another conventional machine. If you're a coffee drinker, try a straight espresso – and don't be afraid to ask your friendly and knowledgeable barista for a longer pre-infuse time. I can assure you that you'll taste a difference.