The Seattle Department of Transportation is proposing to conduct a three-month pilot project at the intersection of 24th Ave NW and Market to see if changes to the lane structure along Market will help the flow of traffic, Bill Bryant with SDOT told the Ballard District Council. Under the plan, the right lane in each direction of Market Street will be right-turn only, except for buses. 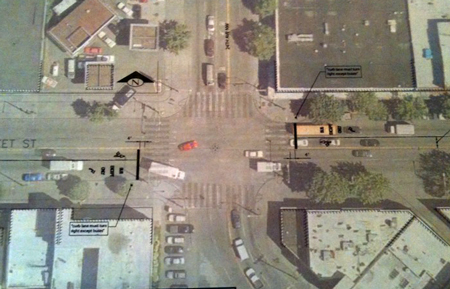 A look at the pilot project. “Curb lane must turn right except buses.”

The whole point of the project, Bryant says, is to improve the 44 but their studies show these changes should also improve traffic flow. “I’m not saying it’s going solve all the problems that exist,” he told the District Council, “this is a very busy intersection.”

If this temporary pilot project is successful, the changes will be made permanent soon after the completion of the project. The project will either take place during the beginning of the summer or the end of the summer, when traffic is at its peak.

Other proposed changes to route 44 along Market include closing existing bus stops at 14th Ave NW, 17th Ave NW and 26th Ave NW. “We find a tremendous savings in transit travel time just by reducing the number of stops,” Bryant says, explaining that under the proposed changes stops would be a quarter mile apart instead of the current 1/8th of a mile. 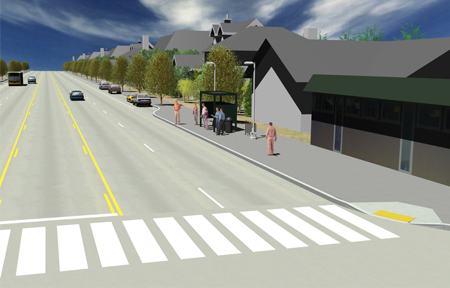 An SDOT rendering of a bus bulb.

Proposed changes also include the installation of bus bulbs on Market at 11th Ave NW and 28th Ave NW. A bus bulb pushes the sidewalk out to the lane of traffic, so buses don’t have to pull in and out of traffic.

There is another SDOT project team looking at the flow of 24th Ave NW between Market and 56th and possibly up to 57th, Bryant says. The proposal for that stretch of road will be coming out at some point in the future.

We’ve updated this post to clarify that the pilot project is just a proposal at this point. Bill Bryant with SDOT tells us that there are still a couple of meetings left before the final decision is made on the project.

It is excellent that SDOT is looking at improving transit time of the 44, and the changes in Ballard look nice. The elephant in the middle of the room is Aurora & N 46th St.

No way! This is great news!
I was just about to post something in the forum about this intersection and how lame it is.
KidFace win!

There are many issues with the strip of 24th between 57th and 56. Some of the problems stem from the blocks leading up to that area – 58th and Market. IMHO – When they put 24th on the “traffic diet” it really screwed up this little area – the change is abrupt, sudden and no one properly anticipates it. Add to it shareways, the “improved” QFC where semi-trucks use the center turn lane to unload, shoppers (peds and drivers) who ignore the crosswalk at 57th/24th, the unpainted crosswalk on the north side of 27th at 24th, and the flagrant parking violations where people crowd the corner and block the views at every intersection from 58th all the way to market along 24th and each cross street, the occasional biker who unpredictably ignores traffic signs selectively and uses pedestrian crosswalks to preserve speed, and those heading south on 24th who fail to realize that its suddenly two lanes again on 24th south of 56th, and this area is a dangerous dangerous dangerous dangerous mess.

All of this seems like good stuff, to me, particularly removing 44 stops. It would be nice if that bus became a way to get to the U District in under 45 minutes.

Odd, though — if there's a direction at this intersection that really needs the right lane to be right-turn-only, it's Shilshole northbound.

I drive up Shilshole to 24th many times a day – and actually rarely see people turning right. I think the right line should be straight/right only, and the left lane should be left turns only onto Market. Right now it's just a giant free-for-all. Fleh.

Yeah, I think you're right, that would be even better. Anything's better than the current mess.

That side of this intersection has been make out of date by the density. Its really a dangerous remnant of a country/village road. Honestly, it reminds me more of some intersection at a small european town than anything else.

What Market St at 24th needs is to have a dedicated left turn lane, of which there is no room for an additional one. Therefore, one lane in each direction should be turned into a left turn lane and the other a right/straight lane.

Then, have a normal traffic cycle (instead of the ungodly one direction per green), which would greatly increase the amount of through traffic on Market St (note, with traffic modeling, one lane at 2x time typically gets more cars through than two lanes at x time).

Then have a pedestrian activated all walk signal independent of traffic to eliminate right turn conflicts, plus make it so you don't have to wait 5 signal changes to get kiddy corner of where you are as a pedestrian.

Probably not the most elegant solution, but seems like anything is better than the current solution.

Looking forward to the dedicated right turn lane eastbound on Market this summer. As the weather starts getting nicer there's inevitably a major backup in the eastbound lanes from people leaving Golden Gardens, hopefully this will help alleviate that. Agree on the left turn lane going northbound on 24th, that one seems like an easy fix, not sure why SDOT is not implementing that at the same time.

Great – a Quarter of a mile apart – what about those of us who do not get around well, but don't need a wheelchair yet? I cannot walk that far. What we need are MORE FREQUENT buses – not longer buses, not stops further apart – a bus every 15 minutes. Idiots! Those of us who need the bus to get around will just have to move out of Ballard if this goes through.

They did this exact thing recently for the northbound lanes at Northlake and 34th in Fremont. It works perfectly!

your grammar is a dangerous mess!

Agreed, please feel free to repost it with edits!

About time! Everyone in our household has been cut off at this intersection by someone intent on going straight from the right lane toward Shilshole. I think it's great news.

Jebus! Do SDOT/Metro even bother to research the problem before they attempt “solutions?”

The problem for the eastbound 44 is that all of the right-turning cars are waiting for pedestrians and the bus drivers aren't smart enough to go straight from the (perfectly clear) center lane. I've suffered through up to four interminable light cycles thanks to this failure of common sense.

Now they're going to paint something on the street to ENCOURAGE bus drivers to stay stuck in the right-turn-for-cars lane?

Sort of seems like when they “fixed” the Elliott/Mercer intersection and now counter-commuters on buses find themselves sitting for 5 minutes at a red light.

Sorry, it's only the lanes on Market that are going to change to right-turn only. The ones on 24th are staying the same.

Although, I agree – something needs to be done about the southbound lanes on 24th.

Wow. You are both obnoxious.

It is a good sign that they are doing a test run first. Some consequences are not foreseen easily on paper.

I have mixed opinions on the bus bulbs. The SDOT rendering shows the bulb being way larger than it needs to be. The bulb should be just long enough for people to access the bus and keep more parking available.

I very much agree that Metro should be providing transportation solutions for people who don't have full mobility, but I also think that they can do this without slowing down routes for the vast majority of customers. They seem to be trying to do this with the Access vans, but I don't know anyone who's ever used one, so I don't know how well it works out.

I don't think it's a lack of driver smarts that does this. I think the drivers are explicitly told to take the right lane unless they absolutely have to switch. It's really difficult and relatively dangerous for buses to change lanes.

Bus bulbs also mean traffic cannot get past the bus while it is stopped. Which wouldn't be a big deal until they have to use the lift for a wheelchair or walker user. Then the bus sits there for a few minutes making traffic even worse. Does the bus have to wait that long for traffic to clear before it can pull out? Lane control can be OK until one lane backs up much more than the other one, then drivers end up getting aggressive about cutting in from the lane with less traffic in it.

I think you missed the point, which was a good one.

I like the “walk only” light so you can even walk to an opposite corner. They use them in Baltimore Maryland and they work great. Much less chance of ped/car collisions and then you don't need separate green lights for each direction. Bicycles on Shilshole will mess everything up if it isn't bad enough already.

I think the issue is the connectors to the overhead lines. They can pop off if the driver moves to the left lane. Electric trolleys can't manuver as much as fuel buses.