Just before 8 p.m. Sunday evening a sea lion (possibly a seal) came on shore at Golden Gardens near the Bathhouse. 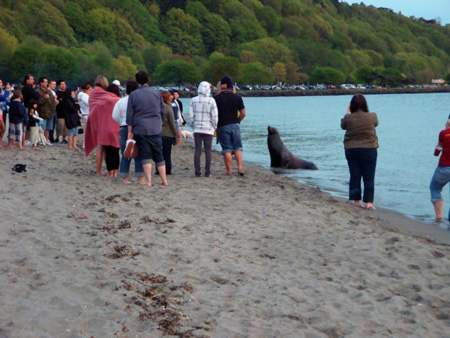 Photo of sea lion before 8 p.m.

Curious and worried onlookers gathered around and watched as the animal collapsed a couple feet out of the water. After noticing a gash on its side, several people called animal control, NOAA and a seal help line, and others contacted a nearby police officer, who in turn contacted Fish and Wildlife. 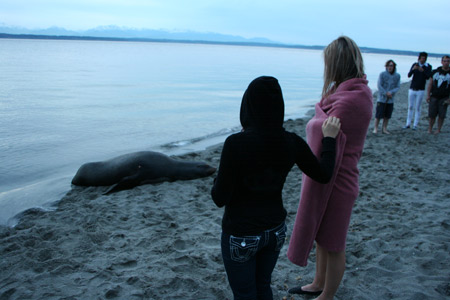 As night fell and the crowd dispersed, the sea lion lay nearly motionless — except for a moment when a TV photographer shined a light on it, and it climbed a few more feet up the beach. Two onlookers remained behind, including Katherine Lewis, who gathered sticks and logs to create a makeshift barrier around the animal, to keep curious people a safe distance away.

“At the beginning, there were so many people watching, and they were very, very close to him,” said Lewis. “I wish that more people were like, what can we do, we shouldn’t be that close to him, let’s give him some space.”

As of 9:30 p.m., a police officer on scene was waiting to hear back from Fish and Wildlife to see if they would respond at night, or wait until the morning hours. “We’re hopeful that he’s just needing to take a rest here and head back out into the water,” Lewis said. We’ll keep you updated.