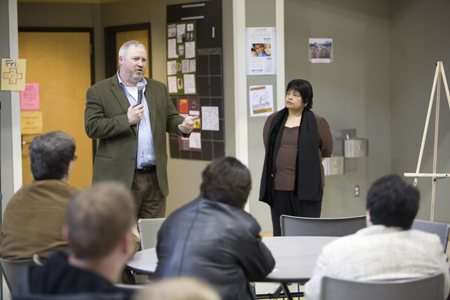 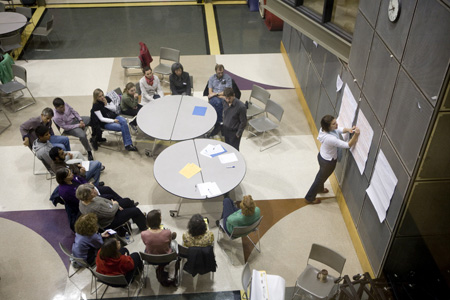 He added: “I think this is a wonderful opportunity to have our voices heard. It’s one of the closest things to a direct way to communicate with a city government.” 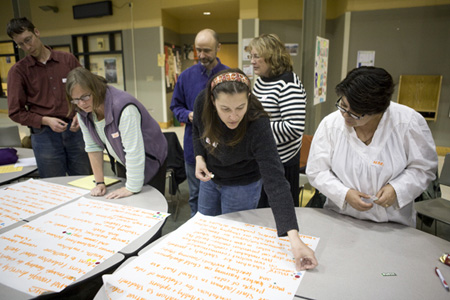 Participants of a community caucus at Ballard High School choose which issues to further discuss by marking issues with stickers.

During his inaugural address McGinn announced the Seattle Youth and Families Initiative. According the initiative website, its goal is “to identify challenges youth and families face and to collectively mobilize towards solutions so that all children in Seattle can succeed.”

“There is a sense in Seattle that we can do better and that we need to do better,” said the mayor. “The problems we’re talking about aren’t new, which tells us that they’re probably difficult problems to solve.”

The initiative was divided into three phases. The first was a series of five large group workshops, which took place in February and March throughout Seattle. At these participants broke into small discussion groups.

The second phase consists of the community caucuses, now under way until May 14.

The third phase is the Kids and Family Congress, which will be held on June 5 at Seattle Center. More than 250 delegates selected from the workshops and caucuses are expected to participate. Input from the three phases will help the mayor shape next year’s budget and families and education levy.

“My intention is that this is the type of an effort that will go through all four years of my term, and at the end I hope we will be able to show measurable results,” said McGinn in an interview at the caucus.

Estela Ortega is the executive director of El Centro de la Raza – a local Latino advocacy group – and co-chair of the initiative. “I’ve been just amazed in my 37 years of doing community organizing, just the number of people of color that have participated,” said Ortega at the Ballard caucus. “We’re talking 65 – 70 percent of the audience is people of color. So it’s been fantastic to see folks come out and express their opinion.”

“He (McGinn) is encouraging all of us to roll up our sleeves and get involved as well,” said Cooley-Stroum. “He’s not saying I am going to solve all these problems now that you tell me your problems. He’s encouraging us to partner with him to find solutions and make it work.”

For more information on participating in or hosting a community caucus please contact Kerry Cooley-Stroum (206-910-1400). All caucuses must be completed by May 14.

A community caucus will be held at Franklin High School on Thursday, May 6 at 6:30 pm.

““Disenfranchised communities, communities of color, he (McGinn) wants to hear from all,”

I guess we in Ballard come last….

Is pink a color?

@Bark More, Wag less
I suppose reading further is too difficult for you.
“He’s been focused on that and he’s also speaking to the whole. So he’s not taking one away from one and giving to the other.”

Were you at the meeting?

I guess he wasn’t.

But Sally, does being pink make me a person of color?

So Farmer Ted and other pink people get no special mention?

Being pink makes you a “person of pallor” as opposed to a person of color.

The Mayor keeps hearing the same thing over and over, consistently, all across the city. And that isn’t any different than what he heard during his campaign. It’s time for our Mayor to stop pandering to the Seattle Process Junkies and start dealing with the problems (3rd-world roads, property crime, economic stagnation, gov’t waste, poor parks). There is a reason his so-called-leadership team is bailing-out. This guy hasn’t got a clue how to do anything but listen and nod.

BTW, “weigh-in” is a noun; there’s no hyphen in the verb form. You weigh in at a weigh-in.

Haha, I noticed that too. I was picturing everyone standing in line for the scale in their skivvies