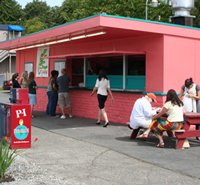 It’s pretty well known around here that Paseo is a popular spot for Cuban sandwiches. Now the rest of the country has been let in on the secret. The Ballard eatery is getting national attention for its Cuban Roast Sandwich. TLC is doing a special series called “Best Food Ever” and has named the Cuban Roast the second best sandwich in the nation. You can read the rest of the sandwich rundown here.

I love Ballard and all, but, really, ‘Ballard eatery’? More like Fremont eatery that opened a location in Ballard. I mean, if Mike’s Chili Parlor opened a Georgetown location, and they won an award, wouldn’t you think it hinky if someone called it a Georgetown eatery?

Darn, my fauxML tag of nitpick got stripped. =)

great sandwich, but the Rajun Cajun at the Other Coast is better.

That review is funny. If you research a bit the guy that owns it is Lorenzo Lorenzo – but that is all you can really find. Old Seattle news says he owned a restaurant in Wallingford before…

All I care about is that people flood Fremont and keep Ballard for us locals.

Paseo’s is amazing! I like the #1 the best. They have amazing flavors and the best sandwiches. I highly recommend calling in otherwise you’ll be waiting in line most likely.

I just wish they’d leave the damn mayo off when I ask for one without it. Happened like 3 times now.

I go to the Ballard location way to much. For all the times I’ve been there, I’ve never tried this sandwich. I usually get the West Caribbean Bowl! Its like the best thing I’ve ever had!

I think Paladar Cubano on Aurora and 90th makes a better sandwich. Lorenzo’s old place was the Cuban place across from Northlake Pizza, back in the ’80s if I remember correctly.

I’ve had Cuban sandwiches in Florida ( ya know, near Cuba…) and wish I could get as excited about Paseos

Ahhhh…no wonder they ran out tonight…

I moved up from an exile in Miami last year. I’ll be the judge of this…

I don’t know how anyone could not like Paseos but that’s just me. Their sandwiches are so delicious. Those onions, the specality mayo….ugh I just might have to get one after work this evening!

Just got back from Miami and Paseo is nothing like the cuban sammies down in those parts. I don’t really care though, cuz they are delicious.

I must be the only person in Seattle who thinks Paseo’s “Cuban Roast” is inedible. The day I tried it (at the Ballard location), the bread was dried out, the meat was dry and there were too many jalapenos. Cubans usually don’t use jalapenos. Plus, the kitchen staff were fighting among themselves and the manager had to step in. It was a miserable experience and I will not be back.