Westernco’s Donut (7500 15th Ave NW) was broken into at some point in the early hours of Thursday morning. 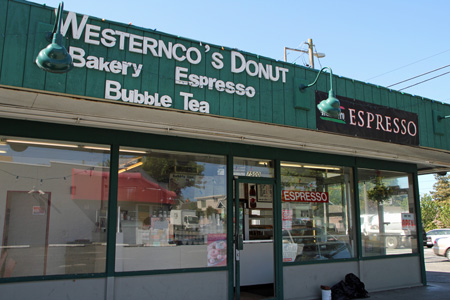 We spoke with the owner who says that someone shattered the glass door, stepped in and took two things – the tip jar and the candy machine. Nothing else was stolen. Police don’t think the suspect even went behind the counter. The owner is thankful that nothing else was taken. The estimate to replace the door is between $250 and $550. (Thanks Louis for the tip!)

We found the candy machine smashed in the front yard of our office this morning on 50th.

Really? This dive? I mean…why?

MG Hart. I assume you are a troll who loves having people respond to your drivel. But in this case I shall feed you. This is a nice small business with nice owners. Based on your comment I seriously doubt you share the work ethic and ca hones to tackle such an undertaking yourself.