A group of Ballardites is starting a postcard campaign to let Mayor Mike McGinn know that they want both our community centers to remain open. 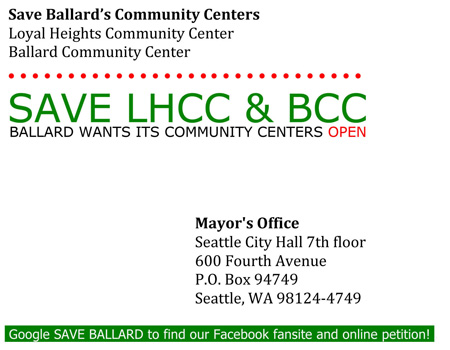 A look at the front of the postcard.

“The community centers are important to me as a way to connect with other families and to keep my family active,” organizer Amy Janas tells us, “After attending the May 5th budget meeting, I was even more certain in my resolve to work on this.” Mayor McGinn is expected to make his mid-year budget decisions around the first of June, and part of the budget discussion has focused on closing one of Ballard’s community centers. “This mid-year budget cut is being made by the Mayor’s office and will affect programs for the rest of 2010. Why we are acting now is that the 2011-12 budget is being worked on,” Janas continues, “We worry that if a community center gets cut for 2010, then it’s going to be cut for 2011-2012–and then from there, the odds of it re-opening seem grim. It still costs money to close a center and maintain it. We see the June outcome as having a great and far reaching impact.” 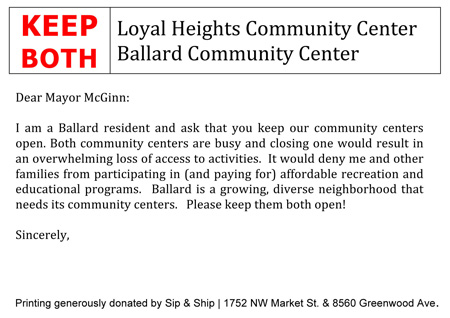 A look at the back of the postcard

The “Save Ballard’s Community Centers” group, led by Amy Janas, Mindy Terence and Adam Tischler, will be handing out these postcards on Tuesday of this week for citizens to mail to the Mayor’s office by June 1. They will be on the sidewalk outside the Loyal Heights Community Center (2101 NW 77th St) and Ballard Community Center (6020 28th Ave NW) from 9 a.m. to noon and 1 p.m. to 4 p.m. Janas tells us that people can drive by, walk by or bike by to get a postcard. If you’d like to help in the distribution of cards or hand some out to your friends, email saveballardscommunitycenters@gmail.com.

wouldn’t it be easier to just e-mail the mayor directly instead of printing all these cards, buying stamps, etc.?

or is this also a ploy to save the U.S. Post Office?

its still a good idea.. and something you can hold in your hand can send more of a impact!

We all know that dance-offs save community centers.

it these folks would have

Can representatives stand out at the local grocery stores from about 4:00-8:00pm ? Many people work during the day and you may get more people to send them in. I hope this works well! Keep the community centers!

And we all want national health care? Gee, those clinics wouldn’t be used as leverage against us, would they? This while our fearless leaders are using furloughs to “ease the pains” and closing libraries, parks, etc, etc? This country, state and country are broke. Unemployment has become another welfare program. I have an idea: send in more of your own $$. Start today. Be a leader/community organizer. No more taxes. We all need less government to have to fund. Treating us all like little kids and taking away our rattle and binkies are NOT the answer. Unfortunately, this is what government does TO us. Time for many here to take a different look at just how things are run/funded. Take off the blinders.