Police statement (6:30pm, 5/28): Tonight, Seattle Police released a statement saying they had previously responded to this residence twice before.  No police report was written on those occasions due to a language barrier.  The Office of Professional Accountability is now reviewing the circumstances to see if all procedures were followed.

Updated: Two people are dead after police say a man killed a woman and then killed himself. 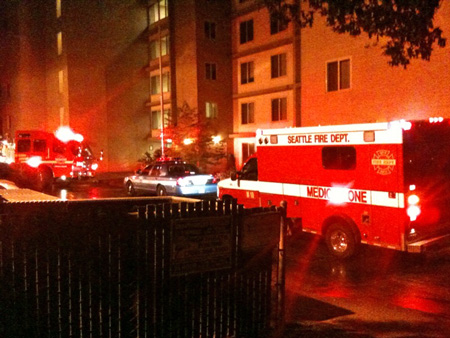 Around 10:15 p.m. Thursday, officers responded to a domestic dispute in the 2400 block of NW 57th St. According to police, the 74-year-old suspect beat the victim with a hammer and possibly other objects. She was taken to Harborview Medical Center where she was pronounced dead. 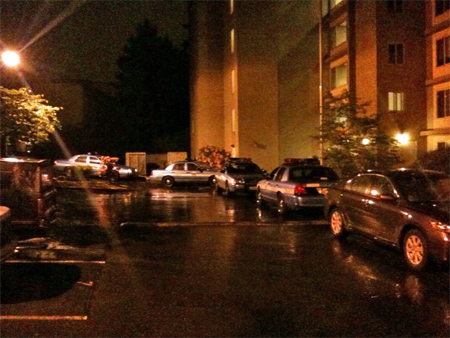 The suspect jumped to his death from an apartment window on the south side of the building. “It’s nearly impossible to see, but on the sixth or seventh floor, a screen on window is broken outward,” said My Ballard reader Robby, who sent us photos from the scene. Police noticed the screen and then discovered the body below. Investigators believe the two lived together.

Both Homicide and CSI were called to the scene to gather and process evidence. (Thanks Robby for the photos.)

holy crap! come on people! life is not that bad!

The Seattle Times is reporting the man was 74. I instantly thought this would be young people.

How tragic. I heard the sirens last night, but they didn’t last very long, so I figured it was no big deal. I’ll say prayers for the families, and the first responders.

Very sad. I live on the same block and see many of the folks who live at Ballard House every day. My condolences to their friends and family.

I am going to ask in advance people please don’t make crass jokes or turn this into a political/old ballard vs new ballard/crime issue. Bring some class into the My Ballard boards.

Condolences to the families and from me a prayer for both deceased, it’s tough to wrap your mind around how or why these things happen.

Heartbreaking. I can not even imagine the terror the poor woman must have endured being beaten with a hammer to her death.

It’s a horrific event, and the couples’ family will have a nightmare to wade through in the days, months, and years to come. I have a sinking suspicion that psych meds may have played a part. We’ll see eventually, I’m sure, as this is picked apart by anonymous commenters like us, the media, and everyone in between. I also hope that building community can come together and stay sane.

I, too, heard the sirens and thought that it must be something minor. It is so, so, sad. This is one of many reasons why our community needs to watch out for one another. I’m sorry that their lives had to come to this.

Police noticed the screen and then discovered the body below. Investigators believe the two lived together.

“Hey, what’s up with that screen? Oh, That’s probably what did it.”

Sorry, it is tragic, but either that is bad reporting, or the cops are idiots.

Hammers are a dangerous weapon, we should seriously think about banning them.

I thought the same thing too but maybe SPD entered on the north side and the article said the body was on the south side. I gave them the benefit of the doubt. I say bad reporting.

Was his name Maxwell?

This building is poorly managed by the city and frequently has disturbances. Tragedies like this ought to be prevented.

Seems like poorly managed Alzheimers or other brain disorder. Maybe Medicare didn’t cover costs for meds and follow up treatment or the affected person wasn’t interested.

I agree, the government should have cameras in every home to monitor for abuse and every family in America should have its own counselor.

I read that he’d killed himself by swallowing the hammer. Wrong again, Stranger!

so if you do not speak english… you are not protected?? how absolutely sad that no translators were brought in for the DV victim not once but twice! i hope some accountability on the police department is brought forth…. and they come to realize that anytime there is a DV call there must be someone who can translate if need be. heartbreaking…….

“so if you do not speak english”

…or you could bother to learn English and stop expecting the world to revolve around you. Both countries I lived in overseas I learned THEIR language.