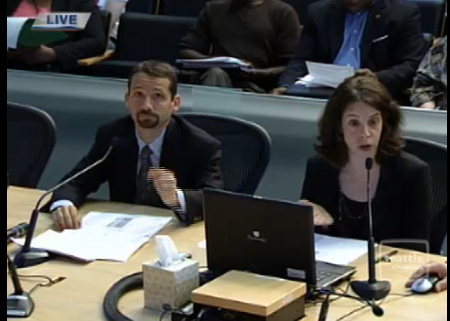 This morning Beth Goldberg, Acting Director of the City Budget Office presented the mid-year budget cuts to the Seattle City Council. As the city faces a projected $11.7 million mid-year General Fund shortfall for this year, cuts will be made in many departments. “In light of the tragic events in Fremont over the weekend, the Mayor is not proposing any reductions to the fire department to give us time, to give us an opportunity, to fully evaluate and review safety implications of changes in the fire department’s budget,” Goldberg announced.

In order to save all pools and community centers from closing in 2010, the Parks Department took a two-percent budget cut of $1.67 million by:

The Gilman wading pool (923 NW 54th St.) will be closed for the summer of 2010. The Soundview wading pool (1590 NW 90th St) will only be open Saturdays, Sundays and Mondays noon to 7 p.m. from June 26th to August 22. “Wading pools are costly to operate, ” Goldberg told the council because of the seasonal workers who staff wading pools, water monitoring costs associated with the pools and de-chlorinating the water as it’s drained. Nearby, the Green Lake wading pool will be open daily 11 a.m. to 8 p.m. and the water feature at Ballard Commons Park will also be operating daily. The “Save Ballard’s Community Centers” group spearheaded a postcard mail-in campaign to the Mayor’s office. Adam Tischler, one of the organizers, tells us that 2,600 cards were handed out and he guesses that 300 to 500 were actually mailed in. Community members also attended public meetings to voice their concerns about cuts to the Parks Department. “We heard very clearly, as I believe you all did,” Goldberg tells the City Council, “That parks services are valued very highly by our community members and are trying to preserve those for the balance of 2010 to the greatest extent possible. But again, we have challenges for 2011. We are not out of the woods.”

Looking forward to 2011, the “Save Ballard’s Community Centers” will look at the 2008 Parks & Green Spaces Levy, which was approved by the voters to fund new parks and equipment. “We’ve seen a clause in the language that gives the council some freedom to reappropriate the funds,” Mindy Terence tells us. The group wants to see if the funds that have not already been allotted for can be used for 2011 and 2012 budget shortfalls and keep current facilities open instead of building new ones.

This is good news.

i just posted this comment on the other community center thread- as this story was being posted- but in addition to not cutting fire fighters- i just heard the mayor talking on npr this a.m., (probably just as this meeting was happening) about how important the community centers were over the weekend as far as allowing the fremont fire victims to gather and be together.

Does anybody here feel undertaxed? Why do we put up with politicians treating us all like little kids over and over, taking away our rattles if we’re not good little children? And today our community organizing mayor announced the appointment of a 21 member music commission here in Seattle. How many children will this feed? Is there a collection box at these centers for users then? Maybe a good-to-go-pass will work there too? Just keep electing the same liberals people. You deserve the hassles.