The Seattle Police Department has a launched new tool for citizens to track crime in the city. 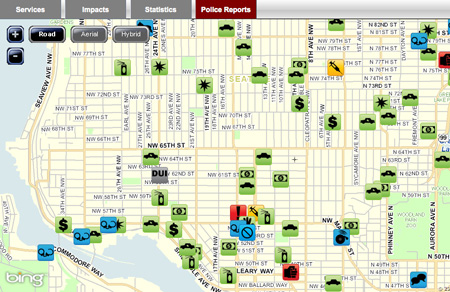 The Police Reports Map has crime icons based on initial police reports taken by officers on the scene. “The crime reporting map is a short-term view of crime: it provides a good sense of what is reported to be going on in a certain neighborhood or the city at large at any time. It is also good for seeing patterns of types of crimes happening (such as an unusual amount of reported bike thefts in your area),” Seattle Police write on the SPD Blotter. Some of the icons will link directly to redacted police reports as they become available. The reports will not have victim information or other sensitive information such as a specific address. Each icon will have a General Offense (GO) number which can be used to request a copy of any unavailable report.

We have a article about possible lay offs for the crime prevention department on our magnoliavoice site. Check it out..

I went to the links and sent an email to everyone on the list including the Mayor. Hopefully, they will keep this team on for public safety and find other things to cut in budget. I am stunned with all the break ins and car prowls recently in the last year that they would even think to do this. If this is important to you and your family you will write them too. Make them think twice

I just hope that they will maintain the site and this is just not a ‘once and it’s gone’ report.

Oh no, I’m sure Mayor Mike hug-a-thug McGinn will keep it running so we can see the effects of his ‘social justice’ program which apparently means strong-armed wealth redistribution.

Guest
when you gotta go...

Where’s the icon for someone defecating in the bushes?