The Ballard District Council unanimously agreed Wednesday evening to recommend four projects to the city for funding from the 2011 Neighborhood Projects Fund. 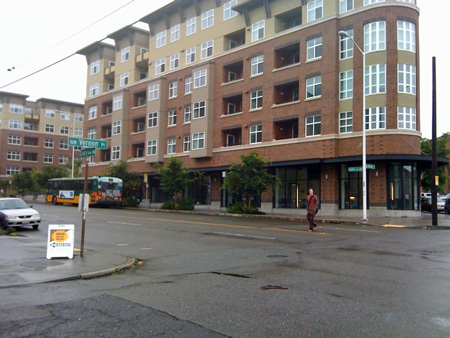 The intersection of 20th Ave NW and Leary Ave NW.

The projects, two of which were proposed in 2009 and two which are new in 2010, are listed in priority order:

Earlier this year, the Ballard District Council had the Seattle Department of Transportation do a cost analysis of each project. The one project that was not recommended this year is a sidewalk/walkway at 17th Ave NW from NW 85th to NW 87th. The cost for this project is estimated at $95,000.

Each of the 13 district councils are asking for the city’s help to fund small-scale projects like these and approximately $90,000 will be available to each neighborhood district. The Ballard proposals come in at $100,854, which as Dennis Galvin, the presenter from the four-person committee stated, it’s better to ask for a little more than a little less.

Let’s just hope the Ballard Chamber of Commerce doesn’t file lawsuits to stop any of these projects!!

Why can’t pedestrians cross Leary on the other side of 20th where there is already a crosswalk? Why are people just crossing the street entitled to two crosswalks at the same intersection?

I hope the Chamber does fight this one. They are having good luck to stop the bike trail and I applaud them for keeping Ballard, Ballard!

Crosswalks slow down traffic even more than it is and that will also hurt our industrial businesses and all of the trucks driving down Leary not to mention Carter VW and all of the buses. All of these so-called-improvements for bikes and walking around Ballard like it’s Disneyland just mean even more blue collar jobs will slowly disappear.

Pedestrians just LOVE to be told we should cross an intersection intersection in 3 directions just to cross it in 1 direction! Why don’t you drive 3 blocks out of your way instead of going straight? It’s roughly the same extra time expenditure!

Any intersection where a street crosses another street is a legal pedestrian crossing unless an explicitly prohibitive sign prevents it. There is good reason for this — walking is one of the slowest forms of mobility one can choose, and a pedestrian needs to trust that if they walk down a street that goes through, they too will be allowed to go through without unexpected and time-consuming reroutes.

In this case, another crosswalk exists for 20th. This crossing — for Vernon Place — already exists as well (legally and with curb-cuts, as shown), but is unmarked on the pavement, creating a potential danger. Some paint, and some non-capacity-reducing curb bulbs are absolutely the way to go.

NO AMOUNT of taxation will substantially improve the quality of cycling in this town (at $18000 for HALF a traffic circle!)
Families and small businesses are leaving this town and you answer is to bash the Chamber? Our sales tax is already 10% and look at the quality (hint: crappy) of roads, transit, parks, schools, public safety. How do you think punishing businesses and saddling homeowners and consumers is going to help you get a bike trail? Fact is, you’re going to have the peddle fast on that bike, on a crappy road, around the bums, to escape the delinquents.

To Fed Up – please take a trip to Detroit and report back.

A quote from fed up;

“Our sales tax is already 10% and look at the quality (hint: crappy) of roads, transit, parks, schools, public safety”

Perhaps if our city did not need to defend stupid lawsuits our tax dollars would go further.

Perhaps if we did not need to spend tax dollars for illegal dumping enforcement against companies like Salmon Bay (illegal dumping in the canal) our money could be better spent. Of course they are a BCC member.

It’s the Ballard Chamber of Commerce which is making sure we get less and less for our tax dollars.

Their delays, and the lawsuits we need to pay to defend, and the lobbyists they pay to drag things out are what’s adding cost to the trail project which we all know is an eventuality.

All to protect probably the richest people in Ballard from having to pay for their employees parking or to teach their drivers how to obey traffic laws.

Thanks, Chamber, for making all of us pay extra for less.

The intersection depicted in the photo is NW Vernon Place & Leary and is where the crosswalk is proposed to be moved to. The present crosswalk is approximately 125 feet south, and is quite difficult to safely navigate on foot, especially for those with mobility issues. As “ballardissmall…” points out this is largely a redistribution of paint and a bit of other work to indicate where pedestrians are encouraged to cross. The proposal removes the paint from where it is now. Ideally there would be a signalized pedestrian crossing….

Dennis.. re the “ideally there would be a signalized pedestrian crossing” Ballard District Council asked for that, and according to SDOT the intersection doesn’t meet signal warrants for a signal = it’s not dangerous enough for a signalized crossing.

#3 regarding a half circle at 67th/18th is crazy. I live in that area and for 8 years I have avoided that intersection because it is too tight with all the cars.

#1 Leary way – Is the other intersection I avoid, but because it is dangerous, many people have been hit by cars there for years and the city has done nothing.The current sidewalk in the vicinity is not in a direction people walk, it takes you away from town.

When you drive all the living-wage (skilled trades, maritime, professional services) businesses out of Ballard with this mayors bike path + taxation plans, you and your pals can serve coffee and sell vinyl records to each other until the money runs out, and there’s no one left to tax.

Has is occurred to you that you’re getting screwed by the City, and a bike trail is going to be the very very least of your worries by about 2017?

Come back when you figure-out that our economic health is directly related to our economic competitiveness. (Shhhhh… don’t tell Mayor McSchwinn. You’ll wake him. He’s sleeping through Economics 101)

Someone mentioned “Detroit”? Fair enough. It’s important to note that they didn’t think it would happen to them, either.

The real problem with 20th & Leary is that it’s a five-way intersection with poor visibility, not that the unmarked crosswalk isn’t marked. Watching cars and pedestrians try in vain to navigate this intersection is an entertaining way to pass the time while waiting for a table at Senor Moose.

Oh yes, if only we had more polluting gravel companies Seattle competitive in the global economy.

What neighborhood will have higher property values and few problems with crime and homeless in 2017?

Where do you think the aggregate for your bike paths is going to come from? Salmon Bay! Genius! You want them to truck it in? (Viaduct?)

If it hasn’t occurred to you yet: Cities are ecosystems, and your utopian ideal (let’s peddle a cafe cruiser to a book reading and stop for gelato!) — in fact doesn’t fly in a global economy. Cities need to compete to keep businesses here. And Seattle is an increasingly terrible place to do business.

Typical Seattle wanna-be city planning poser: Keep raising taxes on business; waste revenues on feeble, half-assed programs; avoid the core issues of education, comprehensive transit and public safety — and THEN tell me that Getty, Adobe and Google will be in Fremont after the next 5-7 years.

Ask any business leader in Seattle what they’re planning, and they will tell you “Alternative locations” is on the top of every list.

When I was young (I’m old), they didn’t need traffic circles, fancy crosswalks, and a whole lot of traffic signals and traffic engineering. There was only one car per family back then, instead of three or four, and people didn’t drive like a bat out of hell every where they went. They drove the speed limit or maybe less. They even used their turn signals, and watched where they were going! That was then.