Updated 2 p.m.: Firefighters were dispatched to a vacant three-story apartment building on NW 63rd St. near 15th Ave. NW just before 7:30 this morning. When fire crews arrived, they reported smoke and flames from a room on the top floor. 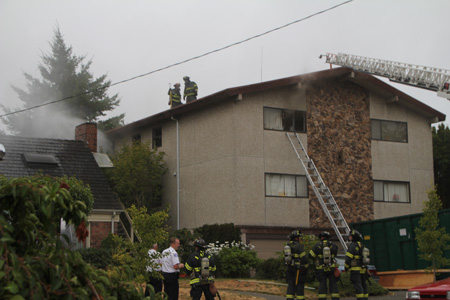 Crews had difficulty accessing the fire due to a large amount of debris on the stairway and on the second floor. A neighbor says the building is vacant and the owners have been cleaning it out.

Investigators say the fire this morning was accidental and caused by spontaneous combustion of organic debris. Damage estimate is $40,000.

Hmmmm. Nobody there/empty bldg. No electricity being used. Unless the debris was combustisble how else could this start? OK I’ll say it: squatters. I hope I’m proven wrong.

Some loser selectively posting police updates from her little scanner alongside ads for cleaning ladies and lost dogs.

This is the future of journalism?

Gold, have you ever read a small town paper in the US? You basically just described one.

Or do you come to myballard to read about the latest developments in Kyrgyzstan?

Why did the link to Silvers updates get removed I wonder? That’s another problem here is stories getting changed after people had commented.

Really, they never ran ads next to stories? Must have been a remarkable paper.

And FYI, that’s the forum she’s posting in, not the classifieds. I’m grateful for her work.

Squatters? Want some more rampant speculation? Ok, construction fires aren’t exactly rare with all the chemical solvents, thinners, strippers, and paints, not to mention electrical work being done with exposed wires. Maybe a smoker working on site didn’t put his cigarette out completely and it smoldered for a while before starting this fire.
Lots of causes for fires in these situations from a mouse getting electrocuted on bare wires to arson for insurance money…anyone posting about the cause is purely guessing.

Gold you’re an idiot! I live a block away and if I didn’t read MyBallard I would have never even known about it. It isn’t like this would have made the PI or any news station. Oh and you MUST be a rich person because those ads help PAY for this site…something you obviously know nothing about.

Please go away and troll on some other blog.

As a neighbor who lives about 4 blocks from the fire and was awakened by the sirens this morning (there were A LOT of sirens) I was happy to be able to boot up, check in on My Ballard, read Silver’s dispatches and learn WTF was going on – i.e. there wasn’t some psycho killer running around stabbing people, Rudd chemical hadn’t exploded, Sunset hill hadn’t sloughed off into the sound, ect…

If this the future of journalism – micro-reports, relevant to my experience and relevant to the second, I say ROCK ON! Way to go Silver – thanks for the info…

Thank you Silver…..I appreciate you.

Sure seems unlikely since there wasn't a single mention of anybody having to be rescued from the building. And since the article also said the owners have been cleaning out the building.

Saw this story on a lo9cal news channel.

They mentioned that the woman was a horder….

“Caused by spontaneous combustion of organic debris”, composting material can generate alot of heat and if there was any flammable items nearby well… just a matter of time.

Fellow losers posting also, Thanks for sharing your epiphany =)

now what, since you've been proven wrong? will you stop your whining?

Really? Sirens blaring all morning? Real Time 911 website? But seriously, what would you need to know about it anyway? If you went through your day without ever knowing how would your life be any different?

Real Time 911 is a great way to find what's going on. How much do you truly need to know anyway, lookylou?

“Investigators say the fire this morning was accidental and caused by spontaneous combustion of organic debris.”

I guess you can say that squatters are a form of “organic debris” but I don't think that's what the fire dept meant.