Updated 8:20 a.m. Three people, including a three-year-old-girl, were taken to Harborview Medical Center after a multiple car accident at 15th Ave NW and NW 75th St. We just spoke with Helen Fitzpatrick of the Seattle Fire Department who tells us only one patient, a man who was extricated from a vehicle, had life-threatening injuries. The girl and other male patient were both conscious and alert. 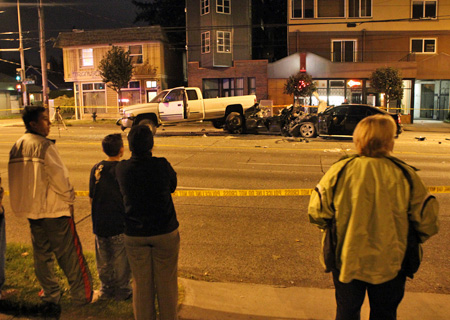 Earlier: Police say a man in his 40’s was driving a black Ford Fusion headed northbound on 15th at a high rate of speed around 6:15 Thursday evening. Witnesses tell police that the Fusion hit one car at NW 70th St without stopping and then rear-ended a Subaru at the intersection of NW 75th St.

The force of the second crash forced the Subaru under the rear of a Dodge truck, which was pushed into another Subaru and a Volvo. All were vehicles traveling northbound, police say. 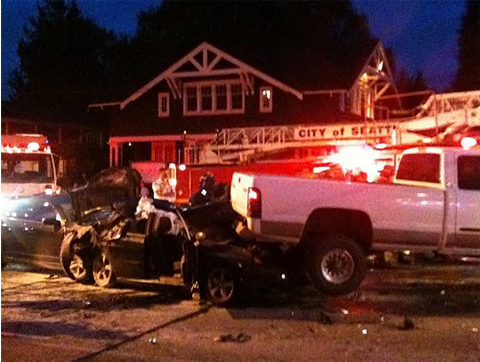 Police are still looking into why the first Subaru caught fire with the 40-something-year-old driver and three-year-old girl trapped inside. Witnesses tell us that some bystanders raced to help the girl escape — an employee at Rizzo’s is believed to have pulled the girl from the vehicle. The neighbors surrounding this accident are to be commended for their help to the victims,” says WonderMother in comments. “They responded with extinguishers to put out the car fire and also a bystander started CPR.” Because of how the vehicles were positioned, police say crews from Seattle Fire had to rescue the driver. 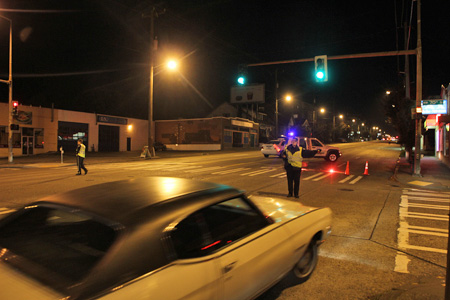 Police say that no one was cited at the scene of the crash, which is standard procedure given the amount of follow-up investigation and collision reconstruction required.

15th Avenue NW was completely shut down at the scene of the accident for nearly five hours while officers and detectives conducted their on-scene investigation. The road is now back open.

“The Seattle Police Department would like to commend those citizens who courageously and selflessly put themselves in danger to help those in need,” the SPD Blotter states.

You can see more photos from the accident scene, courtesy of Silver, posted here.

Thank goodness Silver is there to report! My scanner skills obviously need some honing… :)

Thank goodness Silver is there to report! My scanner skills obviously need some honing… :)

This could be someone you know –my thoughts are with the people involved and thank goodness for brave, good samaritans.

Happened right in front of my dance studio. The fire department had to cut off the top of the car to rescue the driver that was sandwiched in the middle. Two cars were at the stoplight when the third failed to stop for the red light and rear ended them at about 50 miles per hour.

50 mph on 15th? This is 2 blocks from my house, but I didn’t hear a thing. Hope all injuries are slight.

Definitely very serious unjuries. The little girl was unconscious and the ambulence she was put into was not in a hurry to leave. They were either working on her in the ambulence a very long time or they just weren’t in hurry because she didn’t make it. Same with the driver that had to be cut out of the car. After he was in the ambulence it did not leave for a long time. Not a good sign.

I was in the area and saw the Heavy Rescue Response truck speeding up 15th. I followed, and got some photos with my iPhone. The Quality sucks, but it’s better than nothing.

I only heard it, didn’t see it until I opened my curtains to see what had happened. But according to witnesses I talked to the driver hit some one prior to this accident and then kept going. Then he plowed into the two cars at the stop light. Another witness said the driver that caused the accident was having a seizure. We don’t know if the seizure was caused by the impact or if the accident happened because he had a seizure behind the wheel. But when I saw the driver (post seizure) he was coherent and did not appear intoxicated or anything.

Reading the comments just takes my breath away. I have a young toddler. This shouldn’t have happened. My thoughts are with all of those involved. What a terrible night for several families.

I drove by seconds after the accident occured – I have never seen such a mangled mess in my life – the poor fellow in the car seemed to be having seizures, was rocking back and forth behind the wheel – an image I will not soon forget. I am hoping for the best, but fear the worst – I cannot imagine how anyone could survive such a horrible horrible wreck. My prayers are with them all.

The neighbors surrounding this accident are to be commended for their help to the victims. They responded with extinguishers to put out the car fire and also a bystander started CPR. The little girl was awake at the scene.

If she was awake she was limp. When I first saw a woman carrying the child I thought she was a sleeping child hat was not part of the accident (you would think if she was in the accident someone would not be moving her by walking around with her in their arms). The child wasn’t moving or holding her head up, just laying limp in the woman’s arms as she carried her. So if she was awake, she was not mobile.

Fleeing another accident and almost kills (hopefully hasn’t) a toddler? What a scumbag.

Possibly. Or he may have been an epileptic out of control (since witnesses saw him having seizures).

How horrible to have to see that! Although, to shed some hope, I was in a horrible car accident years ago and when witnesses found me was having a horrible seizure. And I survived intact (thanks to witnesses, the EMT’s and hospital). I really hope that everyone involved in this accident survives and heals and will one day only have it be a bad memory.

I passed through that very intersection with my daughter in the car just an hour before that accident. This really shakes me up! I hope to read follow-up that everyone survived and is recovering.

I was waiting at 15th and Market for the bus before the accident happened, waiting for the 15, and noticed a black Ford (which ended up being the one that was at the rear of the accident) stopping and starting at 15th and Market — when the light went green, it waited quite a while before heading forward — figured they might be texting or something. Of course, when the 15 arrived, there was no way we were heading north of 73rd — got off the bus, and saw the black Ford. When I saw the center car, though, I was horrified.

I hope everyone pulls out of this ok.

No question it just makes your heart ache. My 4 y.o. and I drove south past that location about 2 minutes earlier and then watched a seeminly endless line of emergency vehicles stream up 15th in that direction. Upon our return home around 8pm the cops were detouring traffic onto 70th ave right near our house. People being detoured were screaming past our home on 14th at 30-40 mph. I only want to implore anyone reading this to just slow it down in the neighborhoods. I really beg you. In these neighborhood streets there’s no reason to ever go more than about 15-20 mph in our non-arterial streets–remember their our streets and our kids we’re trying to protect and teach. Pax.

The Seattle Times is now reporting that none of the injuries are life threatening. Relieved!!

not seeing that at Seattle Times, still looks like they are reporting at least one very serious injury.

“The Seattle Times is now reporting that none of the injuries are life threatening. Relieved!! ”

Huh. The report I read stated that three people had injuries that were life threatening. So I hope that you’re right, and I’m wrong.

The Seattle Times updated the story to “life threatening”. Guess they didn’t have correct info the first time. :(

I live around the corner from where this happened. My housemates and I heard the crash– it was so loud and awful– and ran out to help. The person in the car which hit the other cars was having a seizure and nobody knew if he was already having it or if it was caused by the accident. He was certainly in a daze. He did get out and walk around, though. The driver in the middle car was unconscious the whole time and after the emergency crews cut him out of his car, they performed chest compressions constantly. As another person mentioned, the ambulances didn’t exactly speed off with their sirens on. I’ve been convinced all night that the little girl’s father died instantly based on what I saw and what I heard from other witnesses. The fact that the news is reporting he’s in critical condition is hopeful to me. I have never wanted to be wrong this badly in my life.