Mon Petit Shoe closing, to be replaced by pub – My Ballard Skip to main content

After four and a half years at 2236 NW Market Street, the children’s boutique Mon Petit Shoe is closing. 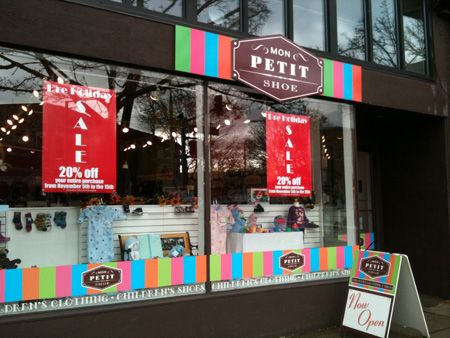 Owner Tiffany Lysene tells us that the tough economy is the key reason that they’re closing. “We spend so much time with the business,” Lysene says, “It just doesn’t make sense to continue if we aren’t making money.”

Lysene is active with the In Ballard Merchants Association and will continue to work with that organization. She also runs a manufacturing business that will keep her busy once the store is closed.

For the next couple of weeks everything in the store will be 30-percent off. After that the deals will get better and better. The store will officially close on December 21st.

Ballard Ave Pub will replace the shoe store. They recently applied for a restaurant/lounge liquor license. According to the license application, the license is “to sell spirits, beer, and wine by the individual serving for on-premises consumption. In this case, less than 50 percent of the establishment is dedicated to dining.”

Why would it be called the Ballard Ave. Pub if it’s not even *on* Ballard Ave? Sigh.

Well thank goodness for that. If there’s one thing Ballard is in desperate need of, it’s another bar.

It’s right across from the end/beginning of Ballard Ave… Differentiates it from the Market Arms while still “locating” it. Not exact but not out of comprehension

Great. Ballard will soon resemble Belltown. We all know the rest of that story. How much longer til we hear about the “need for more police presence”? As a non-drinker I could give a rip about yet another bar. Buh bye shoe guys. Hello Al Cohol.

I came here to say that (in the exact same wry way), found it already well-handled!

Has anyone who continually makes flip comments about how Ballard is becoming Belltown actually ever been to Belltown?

Belltown and Ballard are absolutely nothing like one another. Get a clue.

Buh-bye is right! If Ms. Lysene really wanted to be in the retail business she would have 1) been present in her own store more, 2) hired actual “sales” clerks who were knowledgeable about the products and could actually interact with children and 3) broadened her selection of products to reflect an array of prices (and a changing market). Anyhow, I’m glad that she is going back to what is clearly her priority — manufacturing.

I know my tone seems mean, but almost each one of my experiences at Mon Petit sucked.

So true! Although, I’m bummed that it’s becoming a pub.

There is a huge difference between clubs and pubs in terms of crowd. It is a pretty bad comparison, but I agree with the thought of we are getting a hell of a lot of bars around here…. Wish it was something different, but will still go if it is any good

I agree with some of what ballard_egg is saying. I visited this shop before I had children to buy gifts, and have since been there after having a baby. They never had anything I needed/wanted and the staff wasn’t friendly or helpful. And yes, everything seemed so much pricier (not even enticed by the sale). They didn’t get their market all-around.

Not sorry they are leaving, but would like to have seen another children’s store open up.

I was wondering what store Mon Petit Shoe was, until I realized it was for children. I’ll probably get flamed for saying this, mom dear, but I always thought replacing a well-regarded model store with a kid’s shoe store didn’t make sense. While I might visit this new pub often, I’d never set foot in a shoe store for tiny humans.

Actually, we really do need a GOOD pub closer to Market. The closest one that has decent beer and tasty food is The Loft, which is just a little too far to pop in for a pint during a shopping trip.

Sorry for the loss of another small business,…..sad to see it but people are shopping for deals out there not so much who the business is and what the do for the community.
As far as the bar goes does Ballard really need another Bar? Is this what are
little world is coming to Being Drunk 24/7 and wasting your paycheck away.
If we could only look back about 20 years and see all the damage our Government has done. We all will be jobless and homeless soon very sad.
@ Cindy nice rude comment you Lush!! Try Aurora

You suck try being nice sometime!!

You know what though, the ciggybutt covered sidewalks on Ballard Ave (near the Ryther thrift shop) very much remind me of Belltown streets at 8AM. They’re brighter and wider downtown, but just as filthy.

Your name says it all.

It’s not really kids shoes, it’s an assortment of children’s things but I’m with ya on missing the old toy store that was there. :)

I would say that, but man have you seen the crowd on Saturday nights? I avoid the downtown Ballard core like the plague…all these chicks in small satin dresses and heels. This ain’t Pioneer Square ladies! It’s just odd to me that NONE of these people actually live in Ballard, it’s just their weekend destination (much like downtown Seattle/Belltown is). For those of us who live/work/shop here, it kinda feels like we’re being invaded sometimes. :)

If you folks want businesses other than bars, then you’ll have to start spending some money at them. Bars/pubs make money, kids shoe stores don’t.

Those people who “invade” us keep our property values high and support our Ballard businesses.

Like, totally. I saw three sequin-dressed high-heeled twats walking arm-in-arm down Ballard Ave Sat night. It made me want to throw an umbrella at them (actually, my friend did). Of course, they were on their way to King’s Hardware. And on election night, I had a rough time finding a bar in Ballard that would turn off the NBA game to put on the news. The bridgers and tunnelers have migrated…Pioneer Square to Belltown to Fremont to my beloved Ballard. So what’s to be done? Us mature folk gotta hit the town more often!