Santa visited Ballard on Saturday night as part of the first Holidays in Ballard event of the season. 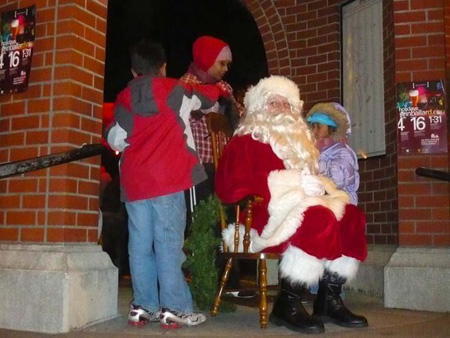 There were also horse-drawn hay rides along Ballard Avenue. 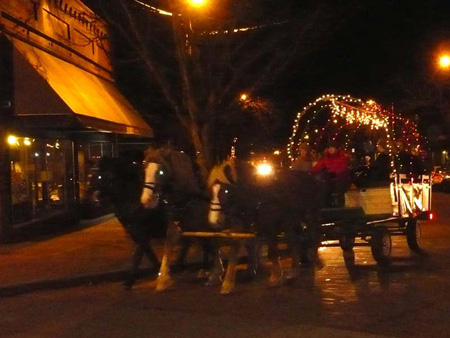 Hovie Hawk with the InBallard Merchants Association sent us these photos and estimates that at least 500 adults and children showed up. The 300 gift bags they gave out were gone by 6:30 p.m., “and people continued to roll in until 8 p.m.,” Hawk tells us.

The next Holidays in Ballard event is a “Grub ‘N Pub Crawl” on December 16th. Get your card punched (card found here, .pdf) at four locations, and enter it to win gift cards to Ballard restaurants and bars. Completed cards can be turned in at the Ballard Sip and Ship (1752 NW Market.) (Disclosure: MyBallard is a member of the In Ballard Merchants Association and the IBMA is a sponsor of MyBallard.)

Nice event, but too bad they didn’t clean up the horse sh*t left behind on Ballard Ave. Vendors setting up at the Ballard Farmers Market Sunday morning found the mess in their assigned stall areas, and customers had to walk through it. The smell lingered throughout the day.

I loved the Christmas carolers from Philidelphia Church, there must of been 50 singers. The whole event was so down-home with that little bit of Ballard quirkyness. Super fun for everyone except for the pooper scoopers.