NW Peaks Brewery is small. Very small. It’s called a nano-brewery, which is smaller than a micro-brewery. “I’ve been a homebrewer for a long time and people kept telling me my beer was as good as most stuff out there,” owner Kevin Klein tells us,”So I decided to take the plunge and move to the next step up, a nanobrewery.” For the last year and a half, Klein has been working to find a good location and get through the permit process. Once the nano-brewery was ready to go, he turned to his friends for a little help. “I started the endeavor, but friends have been helping out with their expertise. It’s amazing who will work to help out a friend and of course, for beer,” Klein says. For the last few months, Klein has brewed about eight batches of beer. 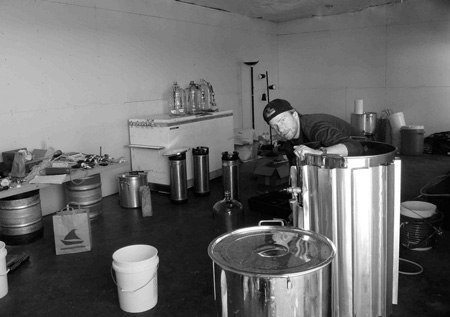 The philosophy of NW Peaks Brewery is a little different than some. There won’t be a “flagship” beer. Instead, Klein has decided to start with the standard styles as “sessionable” beers and will begin with a little more experimentation once he gets the process down. For now, the first two beers are Sahale (a pale ale) and Vesper (a bitter). Coming in January he’ll brew a winter beer called Snowfield and a full-bodied brown called Magic. “And yes, those names stem from names of mountains I’ve climbed in the NW,” he says.

Klein is starting a growler program called the “MountainBeers” which is like a beer-of-the-month club. “It’s a subscription program where you get one or more growlers a month and just exchange your empty growler every month for a filled one,” Klein explains. “Hey, and tis the season, it’s a great gift idea for a beer enthusiast in the area!” 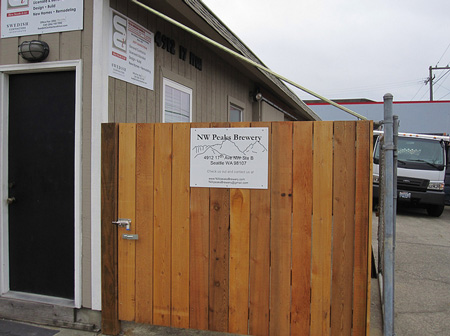 The nondescript entrance to the brewery

NW Peaks Brewery is at 4912 17th Ave NW Suite B. The entrance is through the wooden fence of the Fuller-Anderson roofing/Swedish Contractors building. “We’re working on getting much better signage, but don’t have that yet,” Klein tells us. Check their website for hours, which change weekly.