Ballard man wins Jeopardy, will be back tonight – My Ballard Skip to main content

On Tuesday night, Ballardite Tom Nissley won a round of Jeopardy, and he will be back again this evening. 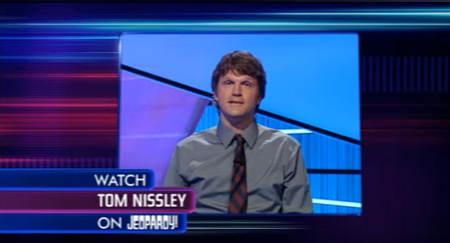 After winning nearly $25,000 on his first night, Nissley says that while he’s relieved to win Jeopardy, he did have one concern during the 30-minute game show – not being able to think fast enough to answer. “That was my biggest fear, getting a question that I absolutely should know and not answer it,” Nissley says. You can see the entire interview here.

According to TheJeopardyFan.com, this was the Final Jeopardy clue which all three contestants got right: “In 1988, this country boycotted the Summer Olympics after its demand to co-host the games was refused.” The answer is “What is North Korea?”

Aren’t you supposed to post this in the form of a question?

What is the way to go, Mr. smarty pants?

He won again on Wed night!

I was wondering about that…