Updated 4:10 p.m. Firefighters rescued eight people from a two-alarm house fire on the corner of NW 65th St. and 9th Ave. NW early this morning. When rescue crews arrived, they discovered the house engulfed in flames and people trapped on the roof, both in front and back of the home. 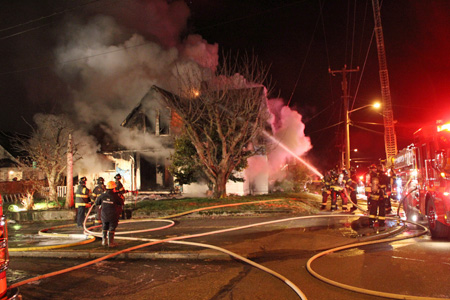 “I was so scared, I thought I was going to die,” 16-year-old Ashley Luberts told a Seattle Times reporter about standing on the roof, surrounded by smoke and flames. Her 74-year-old grandmother, Maria Luberts, was also perched on the roof, waiting for rescue with the rest of the family.

“When we woke up, all we could hear is the screaming,” said Jim, a neighbor, who said he was hit with a wall of smoke when he raced outside. “The grandmother was stuck on the roof, so we tried to get her down.”

Lt. Sue Stangl with Seattle Fire tells us firefighters rescued six people off the roof near the back of the house and the elderly woman from the front. “She was on the edge of the roof, and police officers and firefighters helped her down, and basically she jumped into their arms,” said Stangl. “They did a fantastic job.” 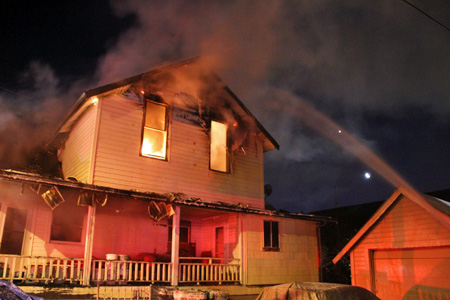 All eight were taken to the hospital. The grandmother suffered from smoke inhalation, but she’s expected to fully recover, family members say. A 12-year-old girl, Ashley’s sister, suffered burns to her arms and hands. The others escaped with just minor injuries.

Lt. Tom Erickson from Engine 21 in Greenwood arrived just after Ballard’s Engine 18. He was part of the rescue team that entered the blazing home to make sure nobody was inside. “There was a lot of fire in there,” he said. “We stayed in there as long as we could, until they told us to get out.”

Battalion Chief Alan Cox says the first crews to respond may receive an award for the rescue. When we talked to firefighters about it, they dismissed the possibility and said they were just doing their jobs. 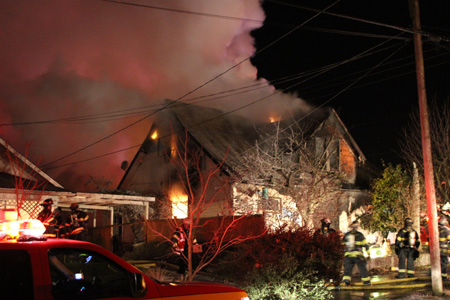 The fire was dispatched at 4:10 a.m. and quickly escalated to a two-alarm blaze. The two-story house appears to be a total loss. Still at this hour, the gutted structure is smoking, with firefighters occasionally dousing hot spots. 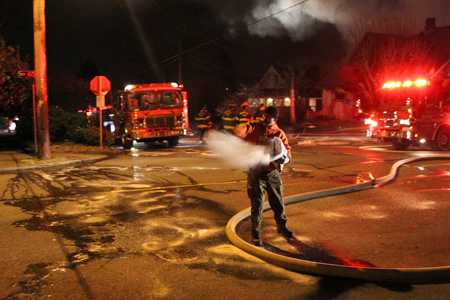 With 23 degree temperatures, the first hydrant broke as firefighters attempted to connect a hose. Water from fighting the fire turned into a sheet of ice over 65th and 9th. City crews spread salt over the ice to prevent firefighters from slipping. 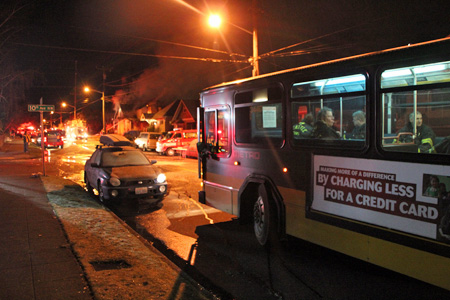 With the fire under control, cold firefighters took refuge in a metro bus called to the scene to help warm them up. Some of their helmets were caked with ice. 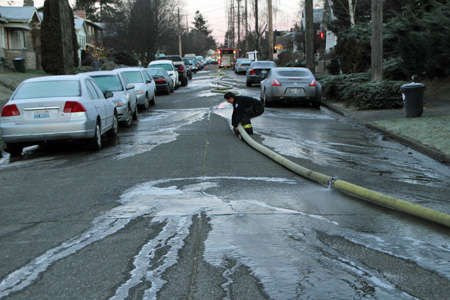 After being closed much of the day, NW 65th Street reopened this afternoon.

A news helicopter hovered over the neighborhood for much of the early morning. From the moment the fire was dispatched, Silver posted updates in the forum here. (Thanks Silver for your help!)

Plus: Watch video of the fire from KING 5

I really can’t stand them.

I can still hear it HOURS after the fire has been out.

don’t they have some stock footage of a burning building they can use?

seriously, good thing I don’t have a surface-to-air missle when I’m sleep deprived…wouldn’t be pretty.

Glad everyone is okay. Get out of our neighborhood helicopter!!! I should not be up before 7 when I don’t work today. pffffffftttt!!!

Anyone know which news agency owns that helicopter? I think it’s time they got a piece of our mind.

Poor family losing their home, but at least escaping with their lives.

I agree 100% with the comments about the helicopter. It is time to take this up with the city. If I were to fire up a lawnmower or a leaf blower at this hour, I would rightly be accosted by neighbors and the noise abatement officers. Why is it that these vultures are allowed free reign–at any time of day?

Guest
Over the hill Steve

Maybe a citizen’s initiative addressing news helicopters is in order.

Guest
Over the hill Steve

I see on seattlecrime.com’s 911 log map that a suspicious person was called from about 2 blocks away and just 17 minutes earlier. I’m hoping for a connection, just to make things more interesting. Now excuse me, I need to fire up the metal detector and look for old keys, bottle caps, and pennies. Where is my “damn seagulls” hat?

They use the copter to give light to the scene, too.

I hope the injured ladies recover.

You people are pathetic . .

Seattle Cry-Babies to the core!!

Look in the mirror for “obnoxious” . .

Your neighbor’s house burns to the ground, 8 people nearly die and yet, somehow this is about you?

I must say, it’s pretty awesome to think you heard sirens or a helicopter in the wee hours and then wake up and come to this site to find such a thorough report, with photographs. Nice work, My Ballard. I do rely on you.

And I am happy to woken up by helicopters and fire crew rather than the smell of my home burning.

Wow, what a story, hats off to the fire department and their brave rescue of this family.

As for the heli-haters, I think they post here mainly to bait other people, don’t you think?

If not, then they’re certainly the most whiny self-centered babies I’ve ever encountered and sure need to get a life if they have so much time on their hands that they can either honestly feel the need to whine about copters, or have nothing better to do than to rile up people on a comment board.

We walked by the house at about 8am and the fire crews were still there. Very scary fire, and the house looks like it’ll have to be demolished — I’m glad everyone got out! The firefighters were really nice and talked to our daughter and showed her some cool equipment. Thanks, firefighters, for getting it under control, saving the people, and keeping it from spreading to other houses!!

Nicely done SFD! Saving 8 lives takes some of the sting off the Fremont fire. Keep up the good work!

Of course the first concern is the family. Firefighters rock!

As for helicopters, why all the defense of them? They are just there to market and make money from someone else’s tragedy.

The news: they’ll wake and annoy an entire neighborhood for *another* story of tragedy. Exactly why I don’t watch the news. Assholes. After this story they reported on job loss and murder.

Have to agree with the heli-haters. MyBallard did a fine job of covering this story via still photos. What would be added by footage shot from the air?

If the firefighters or police need helicopters to do their job, fine. Wake up the whole city if needed. But the news organizations have no good reason to send them in, and definitely no reason to have them hover around a tragedy endlessly.

If a news helicopter is becoming a nuisance – as they often do – call the station and loudly complain. If the station starts getting numerous angry complaints, they’ll tell the helicopter to clear out. Their logo is painted all over the side, and they don’t like to lose viewers…

“Reign” was intentional; they think they are kings. As for those who think us whiners, go look up the word Scahdenfreude. That’s what the newspeople were selling.