The bus stop at NW Leary and Ione Place has always been in front of the Carter showroom, until recently. Earlier this month, the stop was moved to the other side of the intersection, in front of the new location of the Ballard Food Bank (5130 Leary Ave NW). 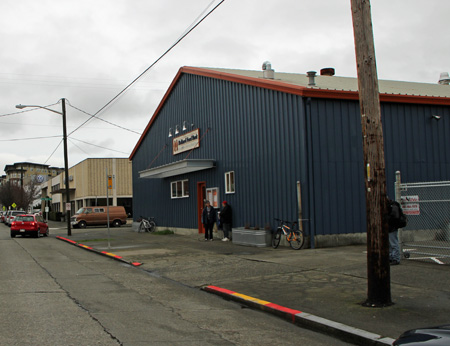 Back in October, King County Councilman Larry Phillips took a walking tour of Ballard. On the tour, Ballard Food Bank employees asked for his help in urging the city and Metro traffic to move the stop. It didn’t take much. Nancy McKinney, the executive director of the food bank tells us that the move is a win-win for everyone. “They understood the rationale and got the job done very quickly,” she says. “We felt that it would be easier for our clients to get on and off the bus directly in front of the building. In addition it took some of the traffic away from Carter’s show room.” (Disclosure: Councilmember Phillips is a sponsor of MyBallard.)