For the last 20 years Janet Back’s husband has been fighting Parkinson’s disease. As a classical music lover, he used to buy records to play on his old turn table. Because of the disease, he can’t do that anymore.

“He’s pretty much in late-stage Parkinson’s and can’t walk a lot of the time, and you have trouble understanding him,” Back says with tears in her eyes. They decided recently to move him into an adult home, and because he doesn’t have the dexterity to use the turn table, Janet decided to sell his record collection.

After calling several stores, she discovered that Bop Street Records (2220 NW Market St.) is one of the few shops with a significant classical music section. So she decided to sell them her husband’s collection.

A couple of days after the boxes were dropped off at the store, Janet remembered something – her husband used to stick money in record sleeves. 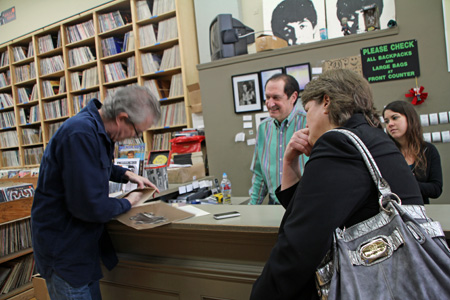 Bob Jacobs and Bop Street owner Dave Voorhees agreed to go through the nearly 1,400 records to look for cash. “When we had only found $200, we called Janet and she was just overjoyed with 200 bucks, so then it became my mission. Let’s find more and more and more!'” Voorhees recalls.

Eleven hours later, after going through each record twice, they had the final tally: $3,553 had been stashed away. “He had the money stuck down in the covers or in some cases inside the paper sleeves,” Voorhees says.

“I didn’t even know how I was going to pay the deductible on my insurance,” Back says of her car that was in the shop. “We just don’t have extra. I mean everything… we’ve just struggled for years.” 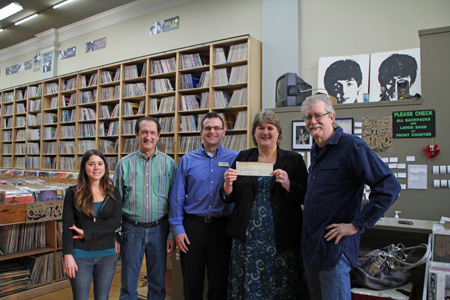 “I think the thing that just blew me away was, you know, in this day and age I think that ethics, morals and standards have really started to slip and I think there are a probably a large percentage of people that would’ve found that money and just put it in their pocket and I would’ve never been the wiser,” she said.

Back gave Voorhees and Jacobs a small portion of the money they’d found, even though they tried to talk her out of it. That money will be donated to the Ballard Food Bank in Back’s name.

“I’m sure someday someone will buy one of these albums and find a special little chunk of money,” Back laughs, “And they’ll go ‘Yee haw!'”

My comment is a bit of a tangent, but Janet made a generalization that really bothered me:

“I think the thing that just blew me away was, you know, in this day and age I think that ethics, morals and standards have really started to slip and I think there are a probably a large percentage of people that would’ve found that money and just put it in their pocket and I would’ve never been the wiser.”

It seems a common misconception from every generation. People keep repeating this statement and have for hundreds of years. As society changes, it becomes easy for people to use selective memory to judge what they can’t or would rather not understand. Popular morality changes, but it doesn’t mean we progress worse. If anything, I think today vs 50 or 100 years ago we overall treat people a lot better than we did.

I am happy she retrieved her money. I can’t help feeling slightly offended at the suggestion that my generation, and by generalization me, would be less likely to do the right thing than she should.

I would have strongly suggested that the albums be burned to MP3 for her husband, and an Ipod be plugged into his ears. Just because he can’t manipulate the music for himself, does not mean he doesn’t need it.

What a wonderful story. Thank you for sharing!

Onderfullone – You bring up a good point. Back’s husband is now using a CD player to listen to his music.

This is a fantastic story! Also, I hope not trolls attack it.

There are honest and corrupt people of every generation – including the generation that knows what ‘records’ and ‘turntables’ are (and/or still have one.)
The news media tends to favor stories about the “no-good-nicks” – so kudos to Geeky Swedes for publishing this story.

Blessed be those who listen ;-)

When my grandmother was moved to a nursing home because of Alzheimers we found over $5000 stuffed in pillows, taped to the underside of drawers and vanities, stashed between piled plates, etc. I’m sure the subsequent owners of the house have found $100 bills evey now and then.

Huge Kudos to Bop Street guys. Thanks for being cool.

I read in the comments that her husband is now able to listen to his music on CDs. That is great!

I agree with your assessment of modern morality Paul, but I don’t feel slighted by Janet for her feeling that way. Through the magic of TV, radio, and now the internet, we are exposed to more of the darker sides of life.

I have not lived in Ballard for over 11 years now but still love it and its great people. I hope to return one day.

Bop Street gang you really rock! This story has put a smile on my face and I’m sure lolly girl’s too, thanks Dave!

Bop Street is waaaay cool in many ways…makes me smile now every time I pass by the store and hear some cool music making Market Street more inviting. Great story.

I agree. But I don’t think your point negates the kindness of the good people at Bop Street or of this particular deed!

This is a great story. On another tangent, how I wish people wouldn’t hide money/valuables this way. My mom has warned me she has stuff hidden around. I dread the idea that I’m going to have to unroll every sock and sift through every jar of flour looking for her treasures. Thank goodness I think she draws the line at hiding cash. She won’t listen to me, but maybe someone else out there will: rent a safety deposit box and make sure there is a way for the heirs to find out about it.

mom said check every pocket…of everything…

I’m being a tad preemptive ;-)