The stretch from NW 60th Street between 8th Ave NW and 15th Ave NW is pretty much a straight shot, except for one traffic circle. Now a group of neighbors is looking at traffic calming ideas. The group, which has already met once, talked about several ideas including painting the street at 11th Ave NW. 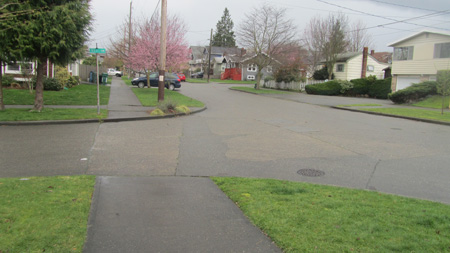 This intersection is a little off-kilter because 11th jogs a little at NW 60th so the group talked about extending the painting on NW 60th to cover the entire area. “We discussed design ideas, which included a fishpond, river with fish/salmon, a transition from birds to bees, similar to Escher artwork, a 3D pothole, and dragon,” the East Ballard Community Association website states.

The idea is similar to the Wallybug project over in Wallingford, which just celebrated its fifth birthday with a fresh coat of paint.

Those interested in this project can attend neighborhood meetings. The next one is Wednesday evening followed by one on March 21st. For meeting location information and more on this project click here.

If the city wants to calm traffic on the side streets through residential neighborhoods, and it should, a big part of the solution is to make the main arterials more efficient. Retiming the lights, parking changes, increasing capacities, increasing public transit, shifting bikes off the arterials and onto bike blvds, speed enforcement on the side streets, etc all need to be done so that there is little incentive to try zipping down a side street.

Why not just install yield signs?

Can’t have that here. It’s Seattle – must make all the evil car owners suffer.

WTF, who cares, look before you drive through an intersection. Dumbfucks, we don’t need the special ed accident prevention shit installed. I’m tired of government trying to big brother everything we do. The people need to actually take responsibility for their actions.

so wave your magic wand and make it so. until then….

I like the idea of a neighborhood working together on a nifty idea. I wish people would drive more carefully and considerately, but nowadays, when everything in our cultrue says, “It’s all about ME.” what can you do to change what’s in peoples minds. With a lot of us it’s a moral, or religious issue; my moral right to do as I please, in the religion of ME.

I still think it’s quite cool.