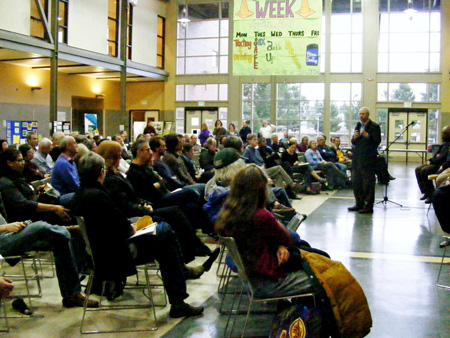 McGinn opened the forum with statements about the Ballard’s transportation issues, saying, “I know Ballard. All three of my kids have gone through Salmon Bay. I know what it means to travel to Ballard, through Ballard and hang out in Ballard,” said McGinn.

McGinn spoke about energy conservation and budget woes, “Our buildings are colder in the winter, and will be warmer in the summer.  We looked at as many things as we could to find efficiencies.

How do you spend your money in a way that gets you twofers and threefers,” McGinn said, emphasizing the need for frugality when it comes to city spending.

The mayor then opened the floor to questions from the audience.  He heard questions including how to handle urban loneliness, job cuts, zoning, homelessness, transportation, and disaster preparedness.

Zoning was a key issue for about a dozen citizens who raised concerns over a planned townhouse development in their neighborhood. Saying the developer’s plan violates existing zoning codes on their block, the group expressed their disappointment in the permitting process.

John Callahan’s home is right next to the construction site.  After the meeting he said he realizes the comments from his neighbors may not have any bearing on the outcome of the issue.  “We may have lost this battle, but the war isn’t over.”

Homelessness was addressed a number of times at the meeting.  Members of the community expressed concern over the lack of shelter for the growing numbers of homeless in the area.  One man raised a parking ticket he received for car camping, asking for more understanding on the part of the city when it comes to those who have lost their homes.

The tunnel replacement for the Alaskan Way viaduct was another issue echoed by a few audience members.  Jack Ellison from Seaview Avenue brought up the issue of dirt-displacement, asking about the “100,000 dump trucks that (would be) traveling through the city.  How’s the city going to handle that, and where is all that dirt going anyway?”

The question raised some chuckles and applause.  McGinn took that opportunity to bring up the inevitable tolling that would be required to finance the $400 million project.

“Data shows that only 40,000 cars would use the tunnel if it’s tolled. That means all the remaining traffic would be on the surface.  (Washington Department of Transportation) data shows that there will be more congestion and delays caused by the tunnel plus toll option than any other alternative,” said McGinn.

“And, we’ll find out where the dirt goes,” added McGinn.

The final question of the night came from audience member Kim Kerrigan.  She asked the mayor about loan modification, the sale of Puget Sound Energy to foreign investors, and the city’s earthquake and tsunami preparedness.

McGinn addressed earthquake preparedness, saying the city has a response plan in place. He said the city has stockpiles of food and water for libraries and community centers that would serve as shelters.

After the meeting, Kerrigan said she hopes to see more Town Hall meetings like this one.  “I think having a regular Town Hall on a monthly basis really works.  We’ve lost the art of face-to-face, heart-to-heart, soul-to-soul.  To build those relations, to be ready for anything, is the point. I feel there was a sincere attempt to hear people tonight,” said Kerrigan.

Contributor Meghan Walker is an intern from the University of Washington School of Communication.

I have a new respect for the mayor. Although I do not agree with all his policies, he was very patient in dealing with people who had a tendency to ramble and not have coherent, well thought out, questions or comments.

I did not like the open forum format. I do believe people have the right to ask questions, but it was more like people standing on their soap boxes. For example, the neighbors who banded together (re: townhome developer)did not need to have more than one comment, as the original commenter laid out their issue, provided the mayor with a pamphlet, and that should have been it. Unfortunately (for the audience), we got to listen more to the same issue brought up more than one time.

“how to handle urban loneliness”

Good to hear the lunatics were out first. Serisouly, does someone what the gub’ment to buy them some friends?

“where is all that dirt going anyway?”

I’m gonna make a t-shirt out of that.

“She asked the mayor about loan modification, the sale of Puget Sound Energy to foreign investors, and the city’s earthquake and tsunami preparedness.”

Yep, the three most pressing issues facing Seattleites. that and meteor deterrence. McGinn better get on that one.

“he was very patient in dealing with people who had a tendency to ramble and not have coherent, well thought out, questions or comments.”

Are you kidding, THAT’S HIS BASE!

The best description I have heard so far.

I was glad to see the two groups fighting developers and City of Seattle Dept of Planning. One of the groups made the comment that it was like David fighting Goliath and he felt the City needs to have an advocate for the public available to assist in their battles against the developers and the Dept of Planning. I wholeheartedly agree having battled the City against the Compass homeless project and the rubberstamping of applications. McGinn did get an earful, enough good issues to make him question the goings on of that Department. I would have liked to see more control over the length of time on the answers — McGinn got repetitive especially when it came to tunnel issues and we only got through 15 questions. Even though I didn’t get to ask my question to the Mayor (No. 28), I was able to address the police lieutenant on how to get more police presence in Ballard.

That is a root of the “McGinn” ; “Seattle” ; “Liberal” problem. Governing down. Government should develop policies that foster #winning. Do not confuse this as a shout out to “Repubs”, they are worse. Libertarians are on a better track.

“how to handle urban loneliness”

So when will Mayor McGinn create a Committee to End Loneliness in Ten years? As a member of one of Seattle’s most vulnerable populations, lonely people, I demand the city provide us with free cats and free internet access to neighborhood blogs to show the world how we became lonely.

Loneliness is a crime that only the governemnt can solve.

“That means all the remaining traffic would be on the surface”

How is that any different from the surface option that has consistently been the least popular of the three choices, after tunnel and viaduct rebuild?

You didn’t go because you are lazy, apathetic and hey it’s easier to sit on the couch and write on a blog than actually get out and do anything. Loser.

Actually it’s because I have kids, and along with my wife, I work for a living and had to finish a report. That’s why these events are dominated by idiots with nothing better to do.

No such thing as a true Libertarian. They are far right wing nutjobs in disguise.

Because the surface option actually goes to the trouble of planning for it by redesigning surface streets, adding transit, and expanding I-5.

Look, the fact is that we’re getting the surface option either way. You can either do it right and save a billion dollars in the process, or you can dig a giant tunnel under downtown, charge $8 for a roundtrip drive and then watch the city streets gridlock because we didn’t have any money leftover to add capacity on I-5, redesign surface streets, or add transit.

So where’s the funding for surface/transit, the least popular of the three choices with Seattle voters?

Oh that’s right, there is no funding.

Really? I’ve known some libertarians, perfectly decent and charming people. But maybe you prefer to stereotype.