Colonel Anthony Wright is saying goodbye to his manicured garden and waterfront home for good.  He’s ending his three-year tour of duty as the operator of the Ballard Locks for the U.S. Army Corps of Engineers. 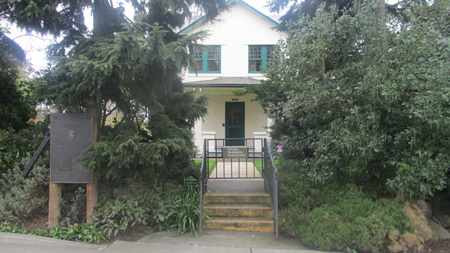 The “Colonel’s Residence” at the Locks

“I’m proud to say I have the best yard in Ballard,” Wright joked as he took the floor at Wednesday night’s Ballard District Council meeting.  Wright has been living at the “Colonel’s Residence” at the Locks for the past three years.

“We have a great group of people working at the Locks, there are about 40 of us, doing everything from gardening to maintenance.  They’re a key part of the community.” He says people always ask him what it’s like to live there. “It’s a great place to live, sometimes it’s like a zoo where people kind of walk by and look at the district engineer in his native habitat,” Wright said with a laugh. “But it’s a very special place, and my family and I have really enjoyed our time there.”

Wright said the Locks made the President’s budget, and will remain fully funded for the next two years.

The 100-year-old Ballard Locks is one of the busiest entry-points in the country, and Wright said they’re in desperate need of a rehabilitation study.  However, the process is “sloth-like and lethargic,” according to Wright.

“We’ve started the process, and we have the money to do it.  Wright said he’s confident that “the investment back into the Locks will result in a benefit back to the economy.”

Wright said he plans to stay in the area when he finishes his assignment.

In fatigues…really? I guess you always have to be ready, in case there is a security breach at the port of entry by terrorists in 80 foot diesel-fuming yachts wearing Brooks Brothers and Sperry Docksiders.

Unlike the full dress uniform, BDUs are comfy and don’t show stains!

actually if you look closely, you can see several coffee stains on his outfit.

I think he should’ve opted for the ‘desert storm’ camouflage. or maybe the newer ‘mocha fury’ BDUs.

I read the article and couldn’t wait to check the comments for the “mean Ballard” reaction to a uniformed Colonel in their midst! You didn’t disappoint KF! You even threw in my other favorite, Capitalist bashing! Why the inferiority complex?

What, would you be happier if he was in a tutu and boob tube? He’s in the army. They wear uniforms. Live with it.

He probably thinks ‘making a sacrifice’ means not getting his reach around.