Third graders at Whittier Elementary are learning that they can make a difference when disaster strikes halfway around the world. After the Japan earthquake and tsunami hit the island in March, teachers Kelly Kennedy and Miranda Fairbrook started to teach the important lesson. 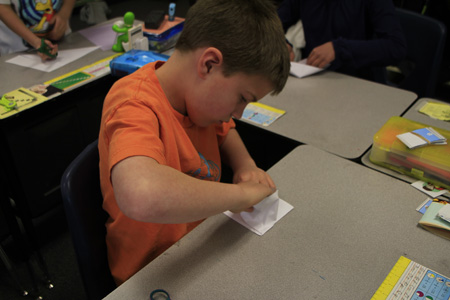 Third grader Ben Dundas making paper cranes. “I felt badly for them and I worried that the same thing could happen here,” he says.

The disaster affected each class differently – one student’s family in Kennedy’s class lives in Tokyo, while Fairbrook’s students had pen pals at an international school in Sendai. “It kind of takes that big world and makes it so small,” Kennedy says. 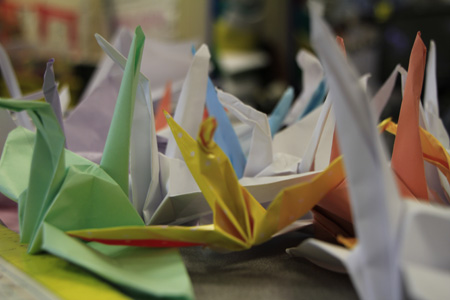 A handful of cranes

The teachers read Sadako and the Thousand Paper Cranes to the students, then both classes started making paper cranes. 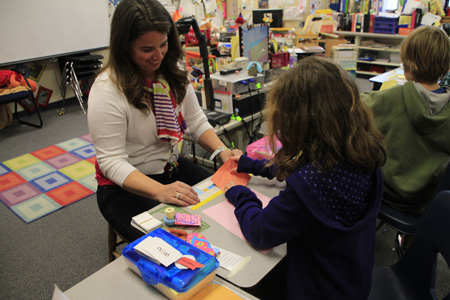 “They were really into it, this class just took off with it,” Kennedy says, as one of her students shows her how to fold the origami bird.

In Kennedy’s class, Yumie Lawson who is from Japan, taught the kids origami. “Whoever makes those cranes, their wish will come true,” she says. Ben Dundas hopes Japan gets help rebuilding. “Hope that they would get more money for repairs,” he says. 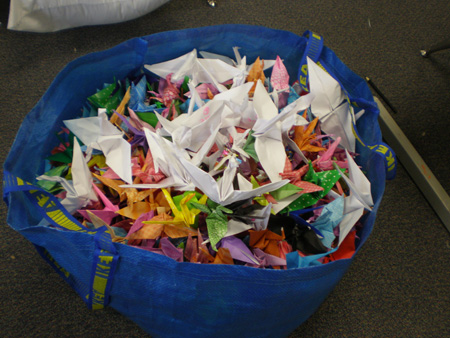 The bag full of donated cranes. The picture “doesn’t do it much justice,” Kennedy says.

Within a few weeks, making cranes everyday, the students had more than 1500 total. Another class at Whittier also made about 100 cranes. The cranes were given to Students Rebuild and will be part of a permanent art installation in Japan. Each crane donated to Students Rebuild was matched with $2 by The Bezos Family Foundation, up to $400,000. The Ballard students raised $3,288.

“I think it was good for them that they were making a little difference,” Lawson says, “They were so concerned about how kids are feeling there.”