Updated with contractor and designer information: A new kind of house is being built in Ballard – a house that produces more energy than it uses. We’re told that this zero-energy house is the first of its kind in Seattle. 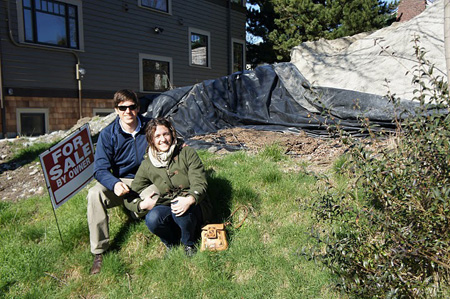 After looking around Ballard for a house to purchase, but were not excited by anything they saw, Eric Thomas and Alexandra Salmon came across a vacant lot. “We were driving back from an open house, and we saw this big pile of dirt with a hand-made for-sale sign on it,” Salmon says. “We called the number thinking it was probably the dirt that was for sale, not the land.” But they were pleasantly surprised. “Mount Ballard,” as the neighbors called it, was sitting on an empty lot that the couple decided to buy. 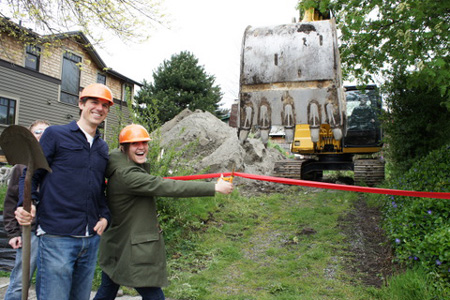 Last Saturday they broke ground on their new zero-energy house at 612 NW 60th St. The home is designed by Zero-Energy Plans, LLC and being constructed by TC Legend Homes. The house will have a well-insulated and airtight shell made of structural insulated panels that will be assembled on-site. There will be a rooftop solar panel that will produce nearly 6,000 watts, enough to power the home’s electrical needs. Water will be heated by an electrical heat pump that is also powered by the solar panels. No oil or natural gas will be used. 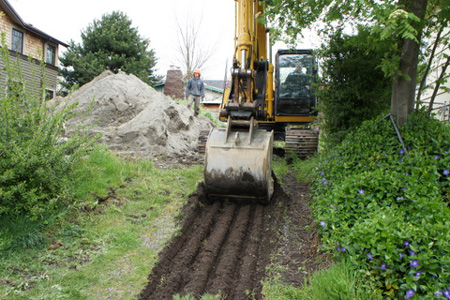 The cost to build the home is similar to purchasing an existing home in the neighborhood and because they won’t have any power bills, they’ll be saving hundreds of dollars each month. On top of that, Washington State has an incentive program that will pay them nearly $1,000 each year for the next nine years. They’ll also receive a 30-percent federal tax credit on certain portions of the energy-efficient amenities. 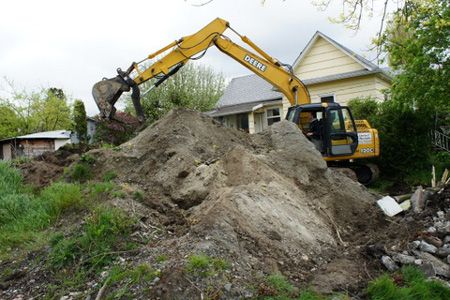 “We’re hoping to spread the word to people in Seattle and elsewhere who care about saving energy and saving money that this sort of house is not out of reach,” Thomas says. “Green building is often seen as a luxury, but we’re trying to prove that it doesn’t have to be. We want to encourage as many people as we can to demand more when it comes to energy efficiency. If we can do this with a little creativity and very limited funds, just about anyone can do it.”

Very cool – not to be whiny or anything, but it seems like a key piece of info here would be WHO the builder is. I’d very much like to know.

I wonder if they took into account the energy required to build a house from scratch. Does the savings they’ll get when it’s built offset these costs?

The 30% is only on limited pieces, like the solar panels. They might get credits for the heat pump and super-insulation, but I don’t know how those programs work. Considering that the solar installation alone will cost around $30-$45K, they’ll still have a tidy refund.

That point is moot since it’s probably a similar amount of energy to build a brown house as a green one. If you were talking about comparing the footprint of living in this new house versus one that already exists, then consider that this new one has a one-time building footprint coupled with a negative energy footprint. It still looks pretty good. The footprint shrinks the longer you live in the home. An already existing house will have a footprint that was large to start and only grows.

oldcrimson – I’ve updated the piece with the designer and contractor. ~Kate

Cool! Hope we keep seeing more of this type of home construction.

Very exciting! Would love to be kept abreast of the progress.

There’s no such thing as a “green” single-family detached house. Such buildings, which have energy-sapping exposure on five of their six sides, can’t compare to an apartment building, which has shared walls and ceilings to conserve energy. Yes, this house supplies its own power, but it uses more than it needs to. If these same techniques were applied to a traditional apartment house, the savings would be much, much greater.

In addition, the sprawling spread-out design of single-family house neighborhoods is anti-green, encouraging automobile travel for every need. This effort is simply trying to “green” its way out of a fundamentally un-green lifestyle.

There’s no such thing as a “green” single-family detached house. Such buildings, which have energy-sapping exposure on five of their six sides, can’t compare to an apartment building, which has shared walls and ceilings to conserve energy. Yes, this house supplies its own power, but it uses more than it needs to. If these same techniques were applied to a traditional apartment house, the savings would be much, much greater.

In addition, the sprawling spread-out design of single-family house neighborhoods is anti-green, encouraging automobile travel for every need. This effort is simply trying to “green” its way out of a fundamentally un-green lifestyle.

Yes, please do keep up with this story! Would be interesting to have periodic updates, and of course pics of the final house.

Yes, please do keep up with this story! Would be interesting to have periodic updates, and of course pics of the final house.

What a dumb comment. So a house that requires no electricity, oil, or gas to operate isn’t green, but an apartment building is even though they suck on the electrical, oil/gas teet.

You sound like someone without the resources to own a house or a car so you knock those that do.

I own both a house and a car.

Please try reading my comment again. Better yet, read some books on the subject of urban design so you can avoid looking stupid. If an apartment house was built using the techniques used in this house, it would use half or less of the energy of this house per unit of occupation. Suburban-style single-family houses are not green, not sustainable, and not reproducible in mass quantities without destroying vast swathes of suburban land. Dense cities like New York and San Francisco are much “greener” than sparsely-settled Western-style cities, per capita, no matter how much dubious green construction goes on in the latter.

Anyone have any insight into what happens regarding electricity when there is a long stretch of dark, cloudy days? If they’re not even going to have an electricity hookup for backup, they’ll need some other sort of backup such as a diesel generator, a big stack of storage batteries, or thousands of local rats running on tiny generator wheels.

Rather than arbitrarily dividing housing into only two sorts, “green” and “not green”, it’s better to specify the details as they have in this story. There are also other lifestyle considerations other than “green”-ness; after all, being a living human is not “green”, but that doesn’t mean we all need to rush out and commit suicide :)

Let’s have more of these. I would love to see this and other high efficiency homes moving in some of the infill development instead of McMansions. There was another take on this in the parking lot at Phinney Center. I don’t think that one was necessarily dependent on solar tax credits as this one seems to be. Small footprints, high efficiency, and greener designs are the way forward.

“I own both a house and a car” hypocrisy at it’s finest.

How can the apartment savings be greater if 100% of the houses electrical needs are met by solar power? There are no additional savings even if the apartment uses less electricity per person. What are you saving? a few of the suns rays?

How does this single family home destroy a vast swath of land in a densely populated urban area? I don’t think ELF will be burning down this one.

i’m not sure this should be discounted so readily. while the “green” house might be better than the “brown” house, calling it zero energy is a misnomer. once built it might not use energy, but there is definitely energy needed to excavate the lot, run the bulldozers, cut down the wood for the house, etc.

plus, the discussion seems to be that their only two options were to build a green house or build a brown house. how about buy an existing house? what’s the carbon calculations on that (which they could upgrade) vs. buying a new “green” house.

That’s a good point, and one we’re really concerned about. (My wife has severe asthma.) The house will have a exhaust fan system, which sucks air out of the dampest parts of the house–the two bathrooms and above the stove–and brings in fresh air through a HEPA filter. We also chose not to have a basement, which can be hard to keep dry in this climate.

That’s an excellent question. The house will have what’s called a “grid-tie” system, meaning the house sends power to the city’s electrical
grid when the sun is out and draws it during the night or on cloudy days. (Contrary
to popular belief, the Pacific Northwest is an excellent place for solar.)
Averaged over the entire year, the panels produce more power than the house
uses. (No rats on wheels required, though that would be cool.)

yeah… except for the energy used to run that earth mover