A year ago Lindsay and Brad Pease were expecting their first child. As Lindsay put on the weight, so did Brad. “She had a reason to gain weight last year, I did not. And when she began to lose her weight, I did not,” Brad says. 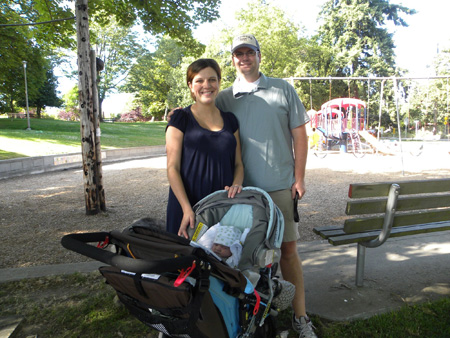 A before picture of Brad, Lindsay and Grant Pease

Lindsay signed the two of them up for the Ballard Fitness Fest. “I knew it was her way of letting me know that it was time to change some priorities,” says Brad. “She is the best thing that ever happened to me and always finds unique ways of reminding me of that fact.”

Brad says the two of them went back to the basics to lose the weight. “It’s a remarkably simple equation: eat healthy and exercise regularly. No fad diet or extreme fitness program required. I did work out three times a week, which meant 6 a.m. workouts so as not to cheat time away from Grant and Lindsay in the evenings. I also followed Lindsay’s lead on what to eat and she prepared simple, healthy meals.” 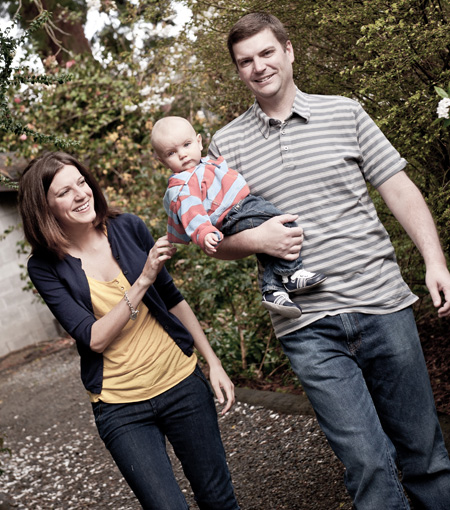 The after shot of the Pease family. Brad says he’s going to celebrate the weight loss with a lot of family photos

Technology also played a part. When trying to decide where to eat out, they used an iPhone app to track calories to make informed decisions on what to eat at restaurants. “But, it’s not hard to know what you shouldn’t eat,” Brad tells us. “I was a french fry addict, and it doesn’t take a rocket scientist to know that they are bad for you.”

After the three-month challenge, Brad won the challenge. According to Erik Hronich of EDGE Personal Training, who puts on the event, Brad lost more than 37 pounds, 9.5 percent of his body fat and 30 pounds of body fat. These numbers mean he lost a total of 23 inches, including five in the waist. The results surprised Brad. “I didn’t know that I had it in me, and I surprised myself. It’s nice to know that I could change a ton of poor habits, but now that I know that I can do it, I have no excuses not to continue,” he says.

Lindsay didn’t do too poorly, either. She tied for third.

Congratulations to the 55 participants! Here is the list of this year’s winners:

As far as advice for next year’s participants, Brad says, “Don’t do it alone. My wife and I were each other’s rock when we began to waver, which happened more than we would like to admit. I would have caved in week two it was not for some well-timed tough love.”

Nice advertisement.  How much were you paid to post this?

Your credability just went down.

I was just thinking the same thing ….

If Brad won the contest, how come Shauna is listed as this year’s “first place winner”? If Brad is the winner, is Shauna the “first loser”? Or since this is a weight loss contest aren’t all the winners losers?

I was wondering the same thing.

Oh, knock it off.  The GS reported on last year’s competition and its winners as well.   And the vast majority of the article is about the couple, not the business

Ever notice how hard Next door media pushed Molly Moon ( especially in the Queen Anne Blog )….  The line that separates news from advertisements on their sites seems rather blurry.

We do not accept payment for “advertorials.” The content on the home page is written because we feel it’s good community information. Oftentimes that information is about fellow Ballardites, Ballard businesses and Ballard events.

We wrote about the Ballard FitnessFest earlier this year and this is a follow-up piece focused on an inspirational couple in our neighborhood.

As msballard30 mentioned, we wrote about the Ballard FitnessFest in 2010. We plan to cover it again in 2012 if it continues.

Good point. I just clarified that Brad Pease is the grand prize winner.

Molly Moon does not advertise with Next Door Media, so I’m not exactly sure what your point is here.

Seriously?  You think this was advertorial?

everyone is a winner!

It’s “credibility”, you moron. And you’ve obviously just lost yours.

Thanks for the great story and inspiration!

Yes, most of us need to cut back on the fats!
Eat healthy and Exercise!

Here’s a tip: if you adopt, three good things happen:

You don’t get baby fat.
You get to give an abandoned child a second chance on life.
You aren’t a selfish human being that feels the need to have their kid related to them.

Not your decision to impose on others

Not when you accuse people who have chosen to conceive of being greedy. That’s an inflammatory attack, not a “tip”.

I take exception to either.

By the way, there’s a lot of kids needing adoption. How many are you taking on? Don’t be selfish, now.

Two actually.  I had the chance to propagate my genes, but I thought long and hard about why that would be necessary.  I don’t need my children related to me to love them all the same.  I would rather my child be one that gets a deserved second chance.