It’s official! The bell at Marvin’s Garden Park will ring once again in Ballard. 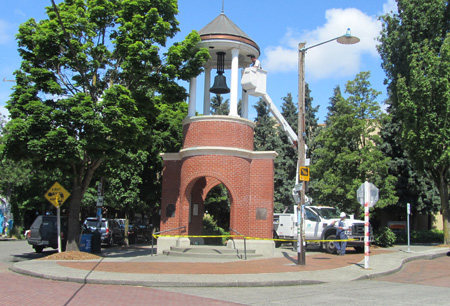 A crew from the Department of Parks and Recreation connecting the bell to a power source to make it automated.

The “Bring the Ring Back to Ballard” was a citizen-driven project and to celebrate its completion, the community is invited to a dedication event at 5:30 p.m. on July 5th and hear the official first ringing at 6 p.m. During the celebration at the Bell Tower (22nd Ave NW and Ballard Ave), there will be a brief tribute to the Ballardites who brought the bell back to Ballard in 1989 followed by a procession led by bagpipers to a reception at the Ballard Landmark. It will be an all-ages reception with live music featuring Tinkers Dram, treats and a no-host bar.

This project was made possible by a Neighborhood Matching Fund award of the Seattle Department of Neighborhoods, Seattle Parks & Recreation and many generous volunteer efforts. The Ballard Historical Society in conjunction with the Bring the Ring Back to Ballard Steering Committee is particularly delighted to honor the original Ballard Centennial group, including late State Senator Ted Peterson and beloved teacher Bertha Davis by restoring the daily ring to the historic bell.