Metro Transit is asking the King County Council for a temporary $20 annual surcharge on licensed vehicles as a stop-gap measure to maintain bus service. Metro has announced that if the council doesn’t approve the surcharge, it will have to cut up to 600,000 service hours – or 17 percent of current bus routes – in 2012 and 2013. 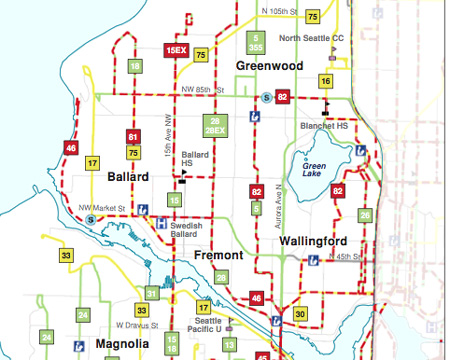 If you can’t make it to one of the public hearings, you can submit your comments to the council online.

Click here for a complete list of all routes (.pdf) and whether the proposal calls for them to be eliminated, reduced or remain unchanged. Click here for a map(.pdf) of all affected routes in Northwest Seattle.

Thanks to Sara and Keith for the tips and links!