On an afternoon stroll in Old Ballard, we discovered artist Matt Bazemore at work, painting the historic Harlow’s building at 20th and Ballard Ave. NW. 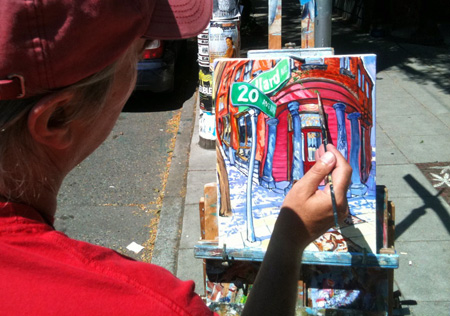 Bazemore’s works span the Seattle area, from the Paramount Theater to the Five Spot on Queen Anne, but Old Ballard is his favorite to capture. “I like to paint the old avenue. Capture some vanishing Americana is sort of the mission,” he tells us. “A lot of the 1900s is still here.” Bazemore has painted several Old Ballard buildings — along with the Bell Tower — in different seasons of the year.

Until Sunday night, Bazemore’s art is on display at The Scoop at Walt’s in Ballard (6408 32nd Ave NW), and you can see a slide show on his website.