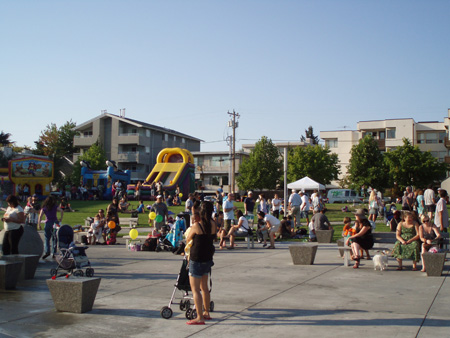 Mobile food vendors including the popular Skillet, Parfait, and Edmonds-based Here and There ringed the streets around the park. Familiar faces like Ballard Farmers Market regulars Dante’s Inferno Dogs and local coffee favorites the Java Bean also participated this year. People lined up for a taste of Ballard Brothers Seafood’s Cajun blackened salmon, first place winner at this year’s Bite of Seattle. Some busy vendors, including Skillet, even ran out of food in the early evening before the actual end time of the event. 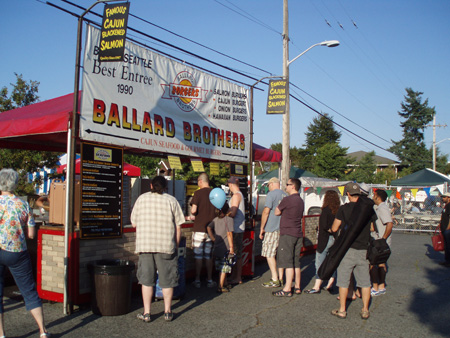 Neighborhood families took full advantage of the warm weather, with children alternately playing in the fountain and jumping around in the inflatable bouncy castles. The lawn was covered in blankets and chairs as Ballardites relaxed while listening to the music provided by several local bands including Matt the Hoopla, Seattle School of Rock, and Another Perfect Crime. 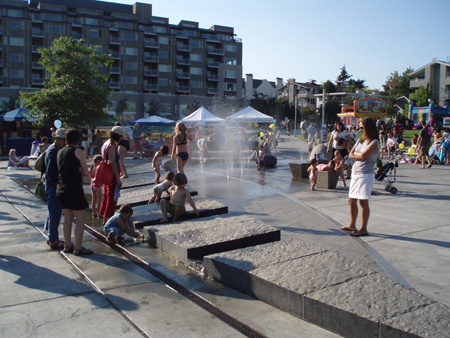 While attendance did seem to be lower than last year Beth Miller, Executive Director of the Ballard Chamber of Commerce and event organizer, still considered this year’s BURP successful and commented that it did need some fine tuning. Competition from a home Husky game may have contributed to the lower turn out but she added “we wanted to coordinate the event with the Ballard Art Walk this year. We plan on continuing with BURP next year and it is a great community and all ages event.” One difference from last year was the lack of an outdoor movie following the food and music portion of the day. Miller did say that the Chamber may consider adding a movie back onto the program next time and changing the hours so that things start later in the afternoon and continue until when the movie begins. (Disclosure: MyBallard is a member of the Ballard Chamber of Commerce.)