A reader emails: “There is a camera crew at Salmon Bay Park (20th and 70th or thereabouts) right now with this crazy dome structure piled with lots of big black trashbags. The people on the crew are acting kind of weird and ushering people away who are running (or driving slowly as I was) by.” 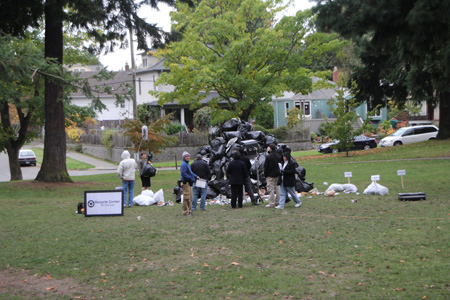 We stopped by and learned that Ian Stone is directing an indie film called “You’re Here.” One of the guys on the crew says that today will be their last outdoor shoot, which is quite welcome given how chilly it is outside. They’ll finish up the film at a studio tomorrow, then it goes into post-production for a few months. It may be out for film festivals such as the Seattle International Film Festival (SIFF).