Years after the start of cleanup at 1515 Leary Way NW, the Department of Ecology (Ecology) says the property is no longer considered hazardous and is recommending that it be removed from the state’s list of hazardous places. 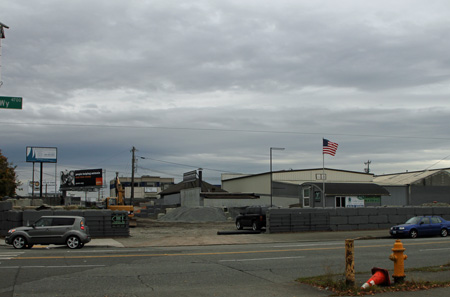 The property, which is now The Dirt Exchange, has been used for industrial purposes since 1928, according to Ecology, and clean-up was done under Ecology’s Voluntary Cleanup Program.

The historical features associated with the former gasoline station include the potential presence of underground storage tanks (UST) and residual petroleum hydrocarbons in the northeast corner of the property. The property operated as an auto wrecking yard, but after the cleanup activities that operation was closed and the automotive inventory was removed. The property then included a small office with a parts counter, a garage-like structure, covered areas with shelving for parts storage, and open areas used for additional storage. These structures were removed and the property was vacant for a time before the current business selling compost/soil located there.

Back in 2003, the clean-up process started. During excavation at the site, three underground storage tanks were discovered – two 3,500-gallon and one 1,800-gallon and 120 twenty cubic yards of dirt was also excavated. Once this was complete, a “restrictive covenant” was recorded with the county. “In February and March 2011, a comprehensive soil cleanup plan was completed,” reports Ecology. “A total of 320 cubic yards of soil was excavated and removed in 2011. The contaminated soil was removed from the site and taken to a permitted landfill. Clean soil was backfilled. Analytical data results from soil samples confirmed that the Site now meets the subsurface soil cleanup standards for an unrestricted land use designation.”

Ecology believes this site should be removed from the state list of hazardous sites “because monitoring data show the site no longer presents a threat to human health or the environment,” according to the release.