The winners of the North by Northwest fashion competition have been announced. The competition was part of the 2011 Nordic Fashion Biennale held at the Nordic Heritage Museum, which ended earlier this week.

From the Nordic Heritage Museum:

The winner of the juried competition is Sarah Borruso of San Francisco, California and the winner of the “People’s Choice Award” sponsored by Volvo is Meg Lord of Portland, Oregon. The runner-ups in the juried competition are Yeon Jang of British Columbia and Tanya Min Jee Ellis of Seattle, WA, and the runner-up in the People’s Choice category is Natalya Robinson of San Francisco, California. 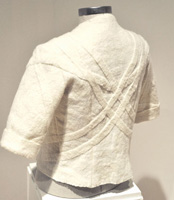 Borruso created the silk chiffon and crepe de chine dress called Play of Lines, II (pictured above), Lord created this un-dyed merino wool, hand-felted jacket (pictured left). Lord writes, “This garment was inspired by the Oseberg and Gokstad Viking ships. The craftsmanship is inspiring not only for the wood carvings on the front keel but for the beautiful overlapping oak shell that curves around the frame and comes to a point at the stern and bow. I incorporated the strips of felt to curve around the body and arms in the same fashion. The use of wool and felting has a very strong history in Nordic culture and with wool being a renewable resource; it is immensely versatile and sustainable.”

The top prize for the two winners is a trip to Reykjavik, Iceland for the 2012 Reykjavik Fashion Week. (Photos courtesy Aslaug Iris Katrin Fridjonsdottir.)