After beating the second-ranked Bothell Cougars on Friday night, the Ballard Beavers boys basketball team is the Seattle Times team of the week. Although Ballard isn’t ranked, Mason Kelley with the Times does put them on the list of teams to watch. 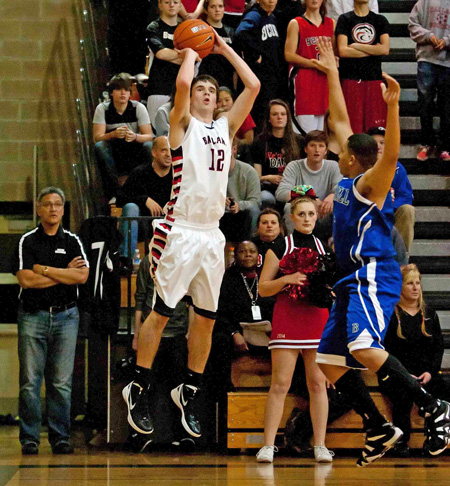 Junior Johnny Verduin shooting against the Bothell Cougars
On Friday, the Beavers beat the Cougars 61 to 53 with Junior Seth Berger, Ballard’s 6-foot 7-inch guard, leading the team to victory with 21 points and 12 rebounds. Other point leaders include Johnny Verduin with 13 points and nine rebounds and Stuart MacGeorge with 12 points and five rebounds.

The boys are at Inglemoor tonight at 7:30. Their next home game is Friday night, 8 p.m. against Woodinville. (Thanks Sue for the photo!)