Earlier: Fifty firefighters responded to a house fire at 4331 5th Ave. NW on the edge of Ballard and Fremont on Friday night. Moments later, the flames spread to the home next door. Anelise sent us this photo from the scene: 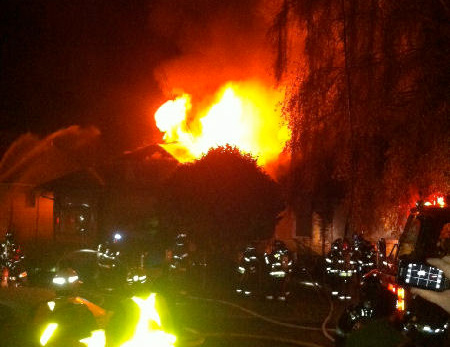 “(We saw) flames and sparks shooting up in the sky,” said Kathy, who lives five blocks away. “The flames were sixty, seventy feet high.”

“There was so much fire coming from that original house, that they couldn’t go inside and attack the fire from the inside,” said Seattle Fire spokesperson Helen Fitzpatrick. “Everything was pretty well involved by the time they arrived.” Firefighters were dispatched at 9:30 p.m. and were still dousing the homes two hours later. Nobody was injured. 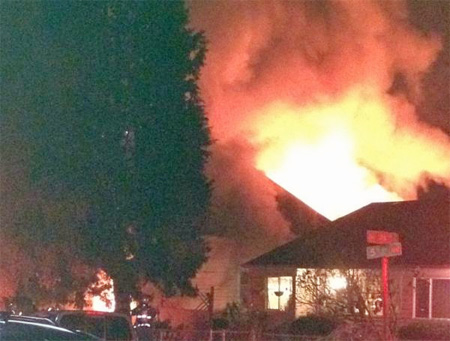 (Fire photo tweeted to us by @gobigelow)

“I initially saw a flash,” says Olivia, who lives a block away. “A few seconds later I saw another one, and then a boom sort of noise.” She said she ran out and saw a house fully engulfed in flames. “It was already on the other roof right next to it.”

Smoke could be seen for miles. Firefighters initially entered the home, but quickly retreated. Here’s video from Evonne:

Firefighters will stay at the scene for the remainder of the night, extinguishing hot spots and ensuring the fire doesn’t flare up again. Both homes sustained significant damage. The cause of the fire is under investigation. 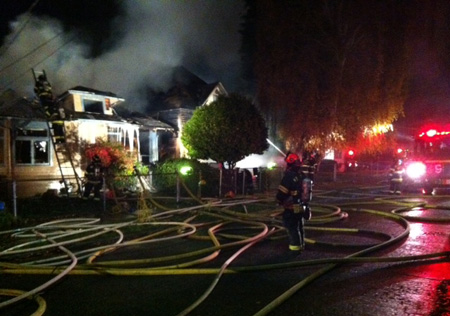 (Thanks to many of you for emailing us, and a special thanks to Capitol Hill Seattle’s @jseattle for the first tip on the story.)