When friends and former colleagues, Gabe Gagliardi and Mike Dahm moved to Seattle they wanted barbecue. They’re both from the south and craved the southern specialty. They didn’t find any that satisfied their taste buds so they opened their own BBQ joint – The Boar’s Nest (2008 NW 56th St). 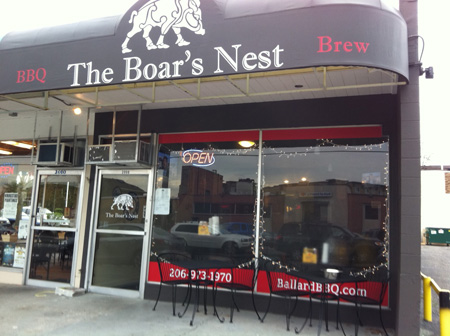 Gagliardi is no stranger in the kitchen. He has two decades of restaurant experience and has opened restaurants in the Hamptons and Las Vegas. His culinary education is from Le Cordon Bleu in Chicago. You might also recognize him from a stint on a reality TV show. He was a contestant in season two of Gordon Ramsey’s “Hell’s Kitchen.”

“The Boar’s Nest specializes in Southern Barbecue including pulled pork, baby back ribs, smoked sausage, fried chicken breast and brisket,” Dahm tells us. “All sauces are homemade and represent the major barbecue regions throughout the South.” The restaurant is open 11 a.m. to 9 p.m. Tuesday through Friday, 11 a.m. to 8 p.m. Saturday and noon to 8 p.m. on Sunday.

The Boar’s Nest has been open about two months. If you’ve stopped in, rate it and write a review here.