Zesto’s closed, being replaced by RoRo BBQ – My Ballard Skip to main content

Another Ballard institution is closed. After 63 years, Zesto’s quietly closed and the new owner is busy getting the place ready to reopen as RoRo BBQ & Burgers. 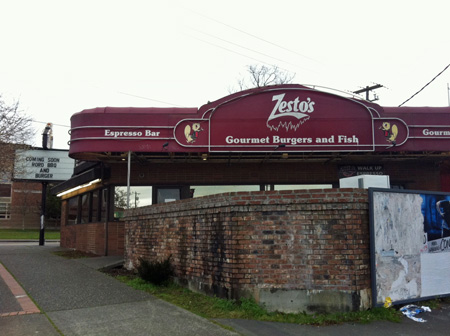 Zesto’s has sat on the corner of 15th Ave NW and NW 65th since 1948. In recent years Zesto’s has made headlines for failing health inspections. In 2007 the restaurant was closed by the Health Department for having six red violations and the PI reported that Zesto’s had the most health and safety violations in the city.

We spoke with Carson Cox, the nephew of owner Rob Cox, who is busy gutting the kitchen. He says this is RoRo’s third location. They’re already on Stone Way in Fremont/Wallingford (3620 Stone Way N.) and Georgetown (1128 S. Albro Pl.) Carson says they hope to open next month and will keep some of the memorabilia that was in Zesto’s.