For more than six months Grant and Hannah Carter have been building out the little space at the corner of Ballard Ave NW and NW Vernon. Their work is almost complete and Bitterroot BBQ will soon be open. 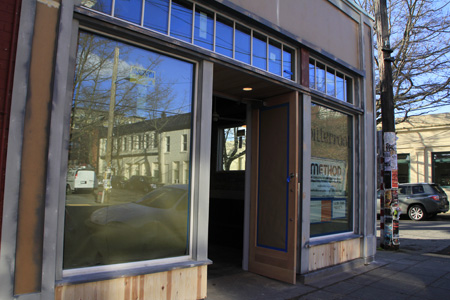 As part of the remodel, they gutted the old ACME Rubber Stamp space (this is what the building looked like before) and the building owner did seismic retrofitting. The two literally started from scratch with a blank canvas. 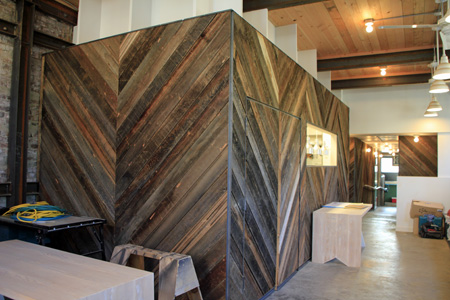 Their designer, Ryan Brooke Thomas, worked with Northwest Timbers in Port Townsend to get reclaimed wood for the interior. The wood comes from old barns that are torn down. The walls are exposed brick, bringing great character to the space.

The front will be all-ages dining room with a row of tables down one side and two larger tables on the other that can be joined for larger parties.

Down the hallway is the bar, which has a back entrance from the parking lot. There is dining in the bar as well as a TV that will be turned on during sporting events.

“We’re super nerdy about our bar and our ice. We’re doing all-American beer, all-American whiskeys or bourbons. That’s kind of our main focus with beverage,” Hannah says as she shows off the ice cube maker they splurged on for the cool ice cubes. “We’re taking our whiskey seriously. We think it pairs really well, obviously, with the Americana BBQ theme.” 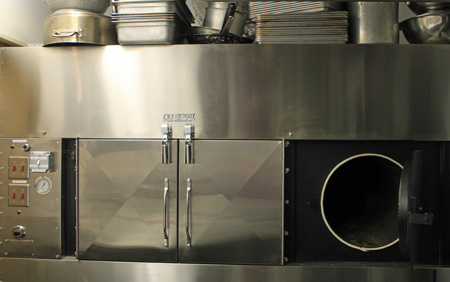 A look at their custom-built smoker

The menu includes “all the classic barbecue favorites,” Hannah says. This includes pulled pork, pulled chicken, whole roasted and smoked chickens. As well as pork ribs, beef spare ribs and traditional sides, which will rotate with the seasons. Sandwiches will run $7 to $10, entrees will be $13 to $17. The only thing priced over the $20 mark will be a full rack of ribs.

The two hope to open early next week, but it all depends on the final inspections. Once open the hours will be 11 a.m. to 2 a.m. with late-night dining until about 1 a.m. They won’t take reservations except for large groups. “We’ll never close early,” Grant promises.