The park will run along two blocks of 14th Avenue NW from NW 59th Street and NW 61st Street. At tonight’s meeting, Mithun, the design consultant, will present three design options, talk about the history of the project and give a site analysis. 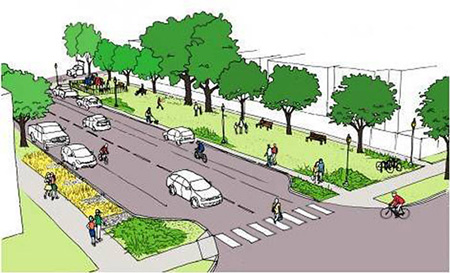 One of the sketches of the park boulevard plan presented to the Ballard District Council in February.

The Parks and Green Spaces Levy provides approximately $1.5 million for design and construction of the 14th Avenue Park Boulevard.

The purpose of the project is to convert two full blocks and two half blocks of 14th Ave NW between NW 58th and NW 62nd from an existing concrete roadway and gravel parking median to green space with green infrastructure and park elements and incorporate safety improvements for pedestrians, cyclists and vehicles.

Tonight’s meeting is from 7 – 9 p.m. at St. Alphonsus Parish School (5816 15th Ave NW.) Construction on the park boulevard is expected to start later this year, with completion in 2013.