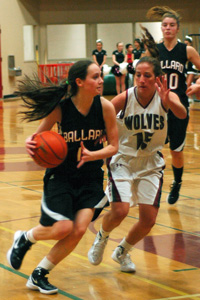 The Lady Beavers had a tough week of basketball playing the number one and two teams in the division back to back. Friday night they played the number four team in the state Woodinville and the Lady Falcons aren’t ranked four for nothing. They played solid pressure defense holding the Beavers to their lowest shooting percentage of the year. The Beavers did not back down holding the Lady Falcons to five points below their season average. The Falcons won 52 to 27. The Lady Beavers were led in scoring by Sophomores Beverly Verduin with 13 points and four rebounds and Imani Bender with 5 points. The Lady Beavers are currently in fifth place in the division needing to be in the top four to make playoffs. They will have to win at least two of their remaining three games to make the playoffs. (Photo of Beverly Verduin courtesy Alan Russo/BHS Athletics.)

Ballard Boys (6-6 league 8-9 overall)
The Beavers snapped their five game losing streak Friday night with a decisive win at Woodinville. Even though the Beavers were in all five games during their losing streak their shooting percentage during their five game skid was miserable. They found their touch Friday night shooting 51 percent from the field and 62 percent beyond the 3-point arc for a 68 to 57 victory. The Beavers were led by junior Johnny Verduin who had a career high 27 points and 17 rebounds. Juniors Stuart MacGeorge added 16 points and Seth Berger with 9 points. Senior Luke Beutjer came off the bench to contribute 9 points and 5 rebounds. They also have an important final week –Ballard is currently in third place in the Crown division of Kingco. The top four teams from the division make the playoffs.

Both teams have three double headers remaining. The bad weather last week will cause the Beavers to play three games in five days. Ballard’s last home game of the season is Tuesday night against cross town rival Garfield. The game is also senior night. Girls tip at 6:30 and boys at 8:00. Both teams are then on the road at Issaquah on Thursday night and at Bothell Saturday afternoon. Kingco playoffs start the week of February 6th.

Come on out Tuesday night to honor our seniors and enjoy some Beaver Basketball!