After nearly five years of planning, setbacks and construction, Martin Floe officially introduced the newest addition to Ingraham high School’s campus. The school hosted a ribbon-cutting event on Monday which featured a walking tour as well as remarks from some of the people who helped make the remodel happen.

The two-story addition is located on the west side of the school, and takes the place of the old portables that were recently torn down. It features 12 new classrooms and an enclosed atrium, as well as a direct entrance to the main campus. 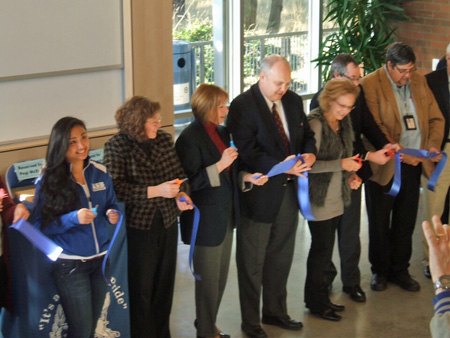 Floe, the school’s principal, was thankful to Seattle voters who helped pass the Building Excellence III levy, or BEX III, which was passed in 2007 and provided the funds for the new building. He also complimented the architects and the construction company on the sleek design.

“As an Ingraham graduate, I’m full of pride,” he said.

The new addition will take the place of the eight portables that were located to the south of the campus. These portables, which have since been removed, were old, had no running water and were isolated from the main campus.

Along with the new building, Ashworth Avenue—the street in front of the building—was paved and new sidewalks were installed. New shade trees and shrubs were planted around the campus as well.

The trees in front of the new building were the source of some conflict that held up construction. Some local neighbors, along with the conservation group Save Our Trees, fought the Seattle school district’s construction plans.

Initially, the district was going to cut down 70 of the trees that stand to the west of the new building. After some lengthy court battles, a King County Superior Court Judge allowed the removal of the trees in late 2010. The school district ended up removing 27 of the trees, while promising to plant new trees throughout the campus.

“I see Ingraham as a good school that’s becoming a super school,” she said, referring to Ingraham’s international baccalaureate program, accelerated progress program and recent remodels. Ingraham received a gym-makeover from ESPN, and was featured on the show Rise Up last summer.

Others on hand to help cut the ribbon included Greg Wong, the president of Schools First, Cindy Nevins, the president of the Ingraham PTSA and Pegi McEvoy, the Assistant Superintendent of Operations.
McEvoy, also a graduate of Ingraham, was proud of the new addition and all of the benefits it brings the students. She said that it was “a day to celebrate our kids and to celebrate Ingraham.”