The City of Seattle has to complete more work for the Missing Link of the Burke Gilman Trail to be approved. 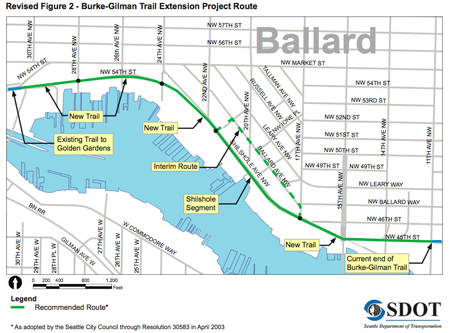 According to the Seattle Bike Blog, the Cascade Bicycle Club states that King County Superior Court Judge Jim Rogers has ruled that the city must present further design details of the proposed trail from Fred Meyer to the Ballard Locks. The Judge agreed with 18 of the 19 conclusions of the Hearing Examiner, but ruled against the one ruling, which requires more work by the city.

The project is planned and funded but progress has been frustrated by years of legal challenges brought forth by a small group of Ballard businesses and the Ballard Chamber of Commerce. Completing the “Missing Link” section of the Burke-Gilman Trail has been planned by the City of Seattle since it agreed to acquire the abandoned rail line right of way from Burlington Northern Santa Fe in 1989. The BNSF discontinued rail service and abandoned the line in 1997, and the transfer of much of the property took place shortly thereafter. A handful of businesses opposed the safety improvements along the corridor and have appealed every decision made.

“While we’re disappointed with the result, we are confident that the City will be able to provide the necessary detail to show that the project would not pose a significant impact to the environment,” said Jeff Eustis, attorney representing Cascade. “Cascade continues to support the City as it works to supply the additional information.” (DIsclosure: MyBallard is a member of the Ballard Chamber of Commerce.)