As we’ve reported before, the Ballard Siphon Project is working to replace a 77-year-old wooden sewer line beneath the Lake Washington Ship Canal. The current stage of the project involves digging a 145-foot-deep hole just off Commodore Way in Interbay to get to the sewer line. Rather than using traditional, often noisy, pile driving and ground freezing to stabilize the structure’s walls, King County and the contractor, James W. Fowler Company, have opted to use a vertical shaft machine (VSM) to dig. This is the first project in North America to use the European-born machine from Herrenknecht. 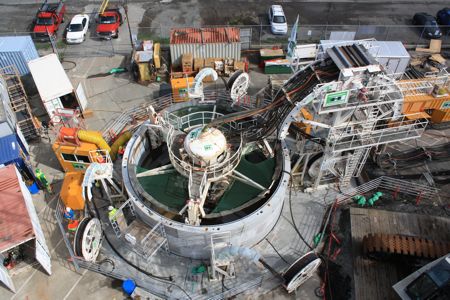 The VSM was chosen for this project because of its quieter, cleaner shaft construction. The VSM works well in tightly confined city spaces and in areas with difficult soils and high water tables, according to a press release from King County. The machine is powered by electricity, and therefore doesn’t require consistent generator use, which leads to constant noise. 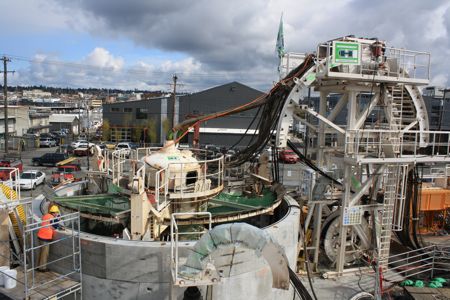 In order to build the shaft with the VSM, an initial section has been excavated, and a concrete ring wall is constructed to support the machine, according to King County. The machine itself lowers as it digs, about three to 15 feet down each day. The shaft is kept full of water as it is excavated which helps to balance the groundwater level and to allow excavated material to be pumped out for disposal. Mike McMillan with the contractor, the James K. Fowler Company, says the VSM is more efficient, cleaner and quieter. The new technology also cuts down on the amount of dirt needing to be disposed of; he says it will cut dirt trucking needs by two thirds. To view a video depicting how the VSM works, visit Herrenknecht’s website.

The shaft is scheduled to be completed in June, and then crews will move underground to build a 10-foot-diameter, 2,000-foot-long tunnel between Shilshole Avenue in Ballard and Commodore Way. King County says that when the siphon project is complete in 2014, it will help control combined sewer overflows during heavy rains, which will in turn protect water quality in the Ship Canal and Salmon Bay.

More information about the Ballard Siphon Project is available here.