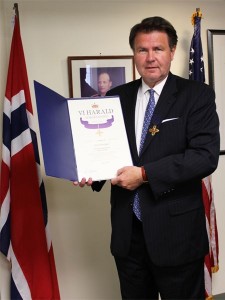 Kim Nesselquist, an important leader in the Norwegian community, was recently appointed to Knight, First Class to the Royal Norwegian Order of Merit, an award that recognizes foreign nationals and Norwegian nationals living abroad for their work in promoting Norwegian-American interests.

Nesselquist, who grew up in Norway, has spent the last 20 years in the U.S. He works as director of development at Pacific Lutheran University, has helped facilitate Boeing contracts for Norwegian airlines, and has been involved in the fishing industries and markets of the U.S. and Norway, according to an article from our news partners, The Seattle Times. He also served as a political adviser in Norway for the Conservative Party and work in the Oslo mayor’s office and as deputy minister for health and social services. He was elected twice to the city council in his hometown of Drammen, says the Times.

The Times says Nesselquist was honored for promoting the interests of “modern Norway,” now one of the world’s richest countries, boasting a lucrative petroleum industry.

Nesselquist was honored during Norway’s Constitution Day, at Leif Erikson Sons of Norway Hall in Ballard.