Update: The U.S. Army Corps of Engineers says the damage to the Ballard Locks will take two weeks to repair. From the Army Corps:

The small lock will remain closed to all but police and fire vessels on emergency response until structural members of the walkway, which help protect the gate, can be fabricated and installed. Pedestrians can use the east gate walkway but won’t be allowed to cross using the west gates until the railing is replaced in about a month.

According to reports, the small lock was damaged when a vessel malfunctioned and could not disengage its engines, hiting the lock gates. Quick-acting lockwall staff were able to clear visitors prior to impact. The Harbor Patrol and U.S. Coast Guard were notified of the incident.

Original post: On Sunday afternoon, the Spirit of 76 hit the west gate of the small locks at the Ballard Locks, sustaining enough damage to close that part of the locks. 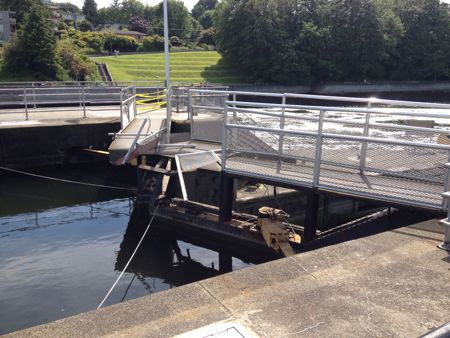 Bill Dowell with the U.S. Army Corps of Engineers told our news partners, The Seattle Times, that the Spirit of 76 hit the gate at around 1:30 p.m. Onlooker Hays Clark says it looked like the boat “lost reverse,” slamming into the closed gate, crushing the walkway. “Luckily no one was on the walkway and no one was injured,” according to Clark.

Dowell said the gate appeared to be holding and not leaking water, but there was damage to the walkway.The small lock is still closed today, but small boats can use the large lock. Dowell said there could be delays for  some vessels.