A local Ballard woman is starring in Shakespeare’s “King Lear,” a production by Freehold’s Engaged Theatre. Ballardite Sarah Harlett plays The Fool in the play. “In our production, The Fool is a life-size puppet!” said Harlett. “I love working with puppets and bringing them to life. I also think it’s an interesting choice for this play. There’s something about The Fool’s language and presence that is ‘other,’ he’s not quite in the court and he’s not quite in the family.” 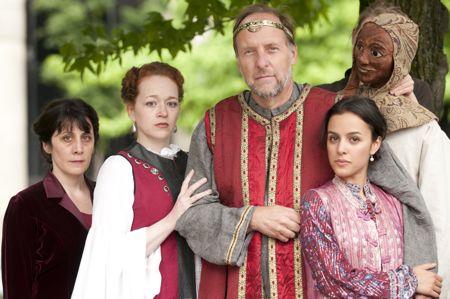 This production is a tragedy by Shakespeare in which King Lear, the title character, descends into madness after divvying up his estate to his children, and his actions bring about consequences for his entire family. The play has been adapted in many ways and this year, Freehold is bringing it to the stage in a whole new light.

Freehold was established in 1991 and engages independent professional artists in its productions. Its Engaged Theatre makes an effort to tour their performances in non-traditional sites. This year they are taking King Lear to communities such as Harborview Medical Center,Washington Corrections Center for Women and the Joint Base/Lewis McChord, among others.

Hartlett, who stars in the show, has lived in Ballard for ten years. She was introduced to Ballard while touring with a performance group in the mid-90s; the space they performed in is now a sushi shop. She has loved witnessing the change and growth in Ballard since then.

Harlett started acting when she was five years old and performed in a school pageant. By the time she was eight, her parents had enrolled her in acting classes and she hasn’t stopped since.

As The Fool, she plays a trusted companion to King Lear and the clown of his court. However, this is not like all the other clowns we see in Shakespearean works; the role of The Fool is to make the King see the truth of his actions rather than to entertain him, says Harlett.

Harlett thinks the play is very easy to connect to because it has to do with friends, family and staying true to your bonds. They have to learn compassion, humility, forgiveness, and to love in the face of certain loss. Harlett says she feels lucky to have been a part of this production and privileged to work with this theatre company.

The show opens next week on Monday, July 2 and runs through Sunday, July 15, with various show times and locations. Tickets are free but donations are encouraged so the company can continue its work.

Reservations are requested and can be made through Brown Paper Tickets, or for more information, visit the Freehold Theatre website.