Hand-painted heels: a mix of art and business – My Ballard Skip to main content

If you have ever had that perfect pair of shoes but wished it had that extra sparkle or touch of personality, your dreams are finally coming true with Hourglass Footwear, a brand new Ballard-based online company that sells hand-painted shoes. 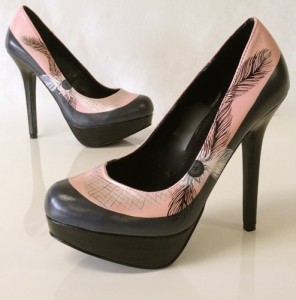 The company was founded by ten professional artists and friends, lead by co-owners Lisa Strom and Kira Bundlie, who were looking for a new way to express themselves. And, well, they all loved shoes. As Bundlie said, “The shape of a woman’s shoe is just inspiring.”

“What is interesting is that when we were going through all our possibilities and ways to use our strengths as a group, the idea came to paint on shoes,” said Strom. “ !” (Correction: Hourglass Footwear is one of very few companies in the country who does hand-painted shoes.)

Strom and Bundlie launched their company through a Kickstarter campaign. In the 36 days that it was online it raised $12,085 from 117 backers, far above their initial goal of $10,000. Bundlie said that they already knew they had a great product and were excited to move forward, but it was still nerve-wracking not knowing what would happen with the campaign.

Both said that the Kickstarter was a shock of adrenaline to see the support their project got after months of collecting shoes, watching their artists develop designs and doing behind-the-scenes work. They insisted that while their names are on the business plan, this has been a hugely collective process with their group and they credit much of their success to it being a team mentality.

“We were checking our email every five minutes and it was so exciting. When it ended, it was a huge sense of accomplishment and excitement,” said Strom.

They are continuing to develop their product with a team of artists that are equally excited about the project; the company expects to have six or seven new designs every week. They offer arange of shoes, such as platforms, stilettos, heels, flats and Mary Jane-style slip-ons. 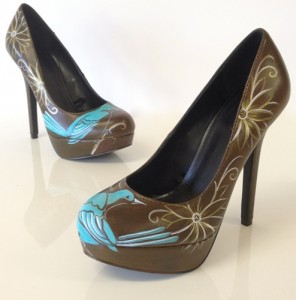 They also do custom orders where people can chose a design they want and they’ll make it to order. Designs are sealed in and made to last; many of them say they’ve worn the shoes for months and they still look great.

“All of the artists we have are independent contractors. Many have home studios or art studios,”said Bundlie, “Right now it’s just ten of them but we’re looking to hire more or get in touch with more as the company expands.”

Right now they are concentrating on getting a stable base and infrastructure for themselves and do organic marketing to get their shoes on the street. However, they have plans for growth. They are targeting brides to wear their shoes and would love to eventually see them on the feet of celebrities or in boutiques around the area.

They also want to find a way and plan to start fundraising in the future where a portion of the profits will benefit something. They’re passionate about the idea of giving back as a way to match the opportunity they have been given.

“The best part of all of this is having ownership and something that is ours; an original idea that was validated by so much support and interest,” said Bundlie. “We created our dream job and that is the most exciting part of all of it.”